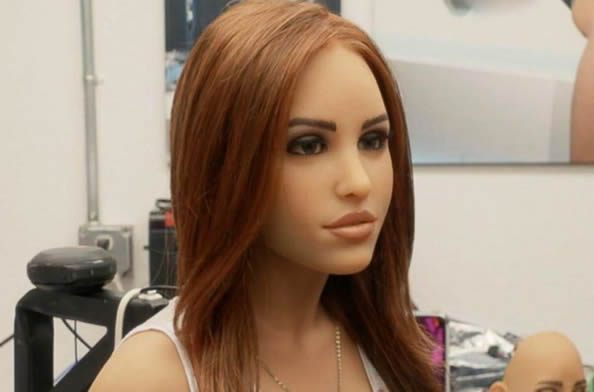 It was recently reported by the Business Insider that the sales for Sex Robots in 2020 has risen to at least 50% due to this fake pandemic; this is from the CEO of one company itself, namely Matt McMullen of Realbotix which is based in Southern California. In this particular report, another company named Green Earth Robotics (GER) which is based in Ontario, Canada, has also admitted that since the coronavirus lockdown, they sell two to three sex robots a day, “mostly to men who is in their 50s and 60s”. Very interesting, isn’t it?

The price for each of this imminent trend of pleasure technology usually starts around, according to GER owner Michael Chan, $3,000. Both of these robot merchants agree that the market for sex robots is growing as the widening decline of intimate relationship continues to leave the mainstream gynocentric society deteriorating. It seems there could be no stopping at this moment and as usual, the governments are already planning its next move to keep the chains for these so-called provider males, like cows producing unlimited supply of milk, through the eternal power of marriage and child support.

Though as the debate still continues, the makers of these virtual reality (VR) “beings” already contest to produce and supply the best and the most efficient ones that would be able to move and talk, at least, closer to perfection; not so much different from a real human which would include ability for seduction through words, facial gestures, and body languages. These sex automatons, according to manufacturers, have also been equipped with the most up-to-date verbal abilities powered by AI (artificial intelligence), like Alexa of Amazon, which could both entertain and provide novel information to its user. Though, as of now these companies admit that it would still take a decade or more for them to produce the greatest quality.

Obviously, there will be many questions for this futuristic notion. One of them is that: are we really ready to adapt this dimension of evolution? Are the emotional capabilities we have suited to adopt mechanical or synthetic so-called companionship? It is true, of course, that there could be many benefits to humans aside from fulfilling our ancient animalistic genetic predisposition which is orgasm but we must really ask ourselves: who could be the real guardians of its limitations? Who will spare human safety, through ethics and rationality, against ignorance, arrogance, and worst, tyranny? There is no doubt that we have again entered yet another phase for the age of robotics and AI. It is important, therefore, to analyse this new realm so that humans won’t suffer further consequences before it’s late. Indeed, experts are still bothered by questions. On the same report, Business Insider wrote:

“Public policy experts are wary about potential ramifications of AI-powered sex dolls. A November study by the US Army Corps of Engineers, Duke University and others found that “more data are needed to characterize risks for sex robots and their AI capabilities, but government agencies must actively engage in gathering, analyzing, and acting upon the data.” Otherwise, the study found, people could get hurt.”

The next important question would be: what would it contribute to our evolution as a whole? Human psychology alone is immensely complex so what if eventually, for example, we expect “normal” responses from this machine? What if in the long run, humans would develop dependency on its shortly explored stimulus? Lastly, what would it mean for our relationship and intimacy? According to an article from Psychology Today, there will be trade-offs:

“As biotechnology, artificial intelligence, and software technologies advance, sex robots are nearly certainly on the way. And they might sound like a great idea to some. But once we think about this technology from an evolutionary perspective, we can quickly see that sex robots will represent an unprecedented form of supernormal stimulus—one that may well have extraordinary physiological short-term benefits, along with equally extraordinary long-term costs, ultimately taxing individuals, dyads, families, and broader communities.”

But what is supernormal stimulus anyway? On the same article, PT explained:

“When you think about things from an evolutionary perspective, the history of human technology largely becomes the history of developing supernormal stimuli for profit.

However, the author also noted that these things are very tricky and often misleading as supernormal stimuli are basically hijackers; meaning that these are our own technological products which “hijack our evolved psychology in a way that leads to short-term emotional and/or physiological benefits”. The author then continued that “since these products are, at the end of the day, evolutionarily unnatural, they quite often do not lead to the long-term evolutionary benefits (such as strong connections with others and/or long-term reproductive gains) which pertain to why these stimuli evolved to be desired by humans in the first place”.

So the author was really worried, noting that “any and all newly developed technologies need to be considered vis-a-vis our evolved psychology”. It is not surprising that most businesses are more concerned with getting high profits than the value and the long-term benefits of ethics, responsibility, and its co-evolution with humans and nature. He also noted that unless the crusaders of this another level of sexual revolution will truly understand the truth about psychological evolution and the relation between our mental and behavioural processes, sex robots would only bring more uncertain existential directionality and challenges to us humans. Therefore, the author concludes that a deep insight to evolutionary psychology must be one of the essential aspects to consider on this issue.

But why some men are starting to embrace sex robots in the first place? What could be the possible reasons why sentient human beings can emotionally attach itself to a prototype machine which is obviously not guided by an organic pulsating heart? Some believe this has a lot to do with the pattern of traits in which the female gender or shall we say the women’s psychology and behaviour (and then later the society in general) signify to the evolution of our species. In one MGTOW (men going their own way) article, the author explained:

“The fact that a jacked body builder is choosing to commit his life to a hunk of plastic….. Well, let’s just say it says a lot about the current state of women. There is no future I see where men aren’t tying the knot with their AI lovers. As dystopic as this seems….machine learning and technology will continue to advance in a way that will makes these sexbots seem like the “perfect lover. It’s inevitable.”

Another reason why many might embrace this technology is that there are now a fastly growing demographic of male individuals already super-conscious about the fundamentals of reproduction, family, population, etc., who grew up intellectually aided with massive knowledge from the internet. Therefore it naturally resulted to the lack of interest in having children knowing how “challenging” or difficult the role of being a parent could be. But it is also possible that due to some of these men’s inability to control their own desire for sex and orgasm, it may lead them to sexual experimentation which might include interaction with mechanical object such as sex robots. As the same article has also pointed out, it is what others have dreamt about: no dates, no shopping, no monthly food budget, no pregnancy (well, not in the future, they say!), no real feelings of regret and guilt, no STDs, no drama and no emotional “roller coasters”, no fake rape for money, no divorce, “just flip the switch….and she’s ready to go”.

Meanwhile, Marianne Brandon, a psychotherapist, has a little somewhat grim vision. Certain that sex robots will be mainstream in a decade or two, Brandon also believes that the questions and problematic areas in relation to this technology should really be addressed concretely, especially with regards to our, in her own words, “evolved relationship psychology”. In the said Psychology Today article, Brandon explained:

“Men, already disproportionately represented as consumers of pornography, will likely be over-represented as consumers of sex robots. Within committed relationships, sexual interactions, which are apparently already on a nationwide decline, are likely to drop further. Intimacy in relationships, which strongly maps onto both quantity and quality of sexual interactions within mateships, is likely to drop in quality as well. The prevalence of marriage and birth rates may well see declining numbers. Motivation for people to work on relationship problems within mateships will be naturally reduced. In short, the advent of sex robot technology may well foreshadow, in many ways, the demise of intimate relationships in the modern world.”