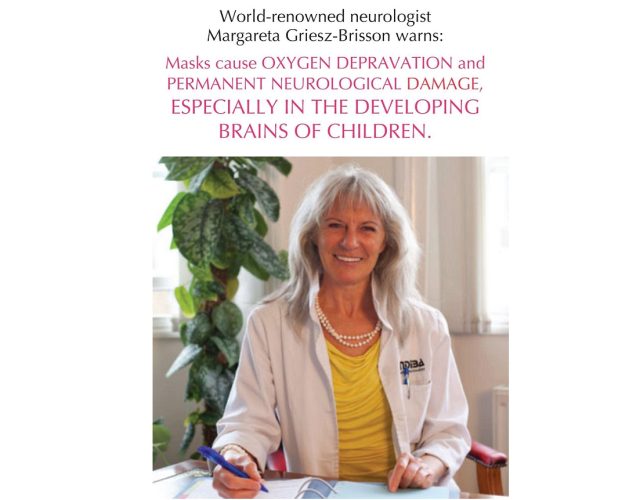 Governments in most places of the United States, the United Kingdom and even in Asia are still imposing the “mask wearing” policy; some with harsh implementation, including fines and penalties for those who don’t comply and wear one. Although many citizens “voluntarily” do it, studies show that their willingness to obey this policy is based on ignorance and fear and not from legitimate empirical scientific experiments. How do we know? It’s because there are real studies about the effects of prolonged mask wearing and in these years of careful observations, it was evident that what most people expect are the opposite: wearing masks is useless and when in a prolonged manner, it is very dangerous to our brain and to our health in general.

For instance, in June, greenmedinfo.com published a scientific review article written by D.G. Rancourt, a physics professor at the University of Ottawa who also published more than 100 scientific papers, about “mask wearing policy” entitled “Masks Don’t Work: A Review of Science Relevant to COVID-19 Social Policy”. On this piece, Rancourt stated:

It is clear that governments imposing this ridiculous policy are either ignorant or just ignoring science because they are powerless to challenge this policy themselves. Professor Rancourt was right when saying that if governments don’t have knowledge about these scientific facts about this matter, they should not recklessly impose policies to the citizens, especially those that could produce undesirable health results. “The government has an onus barrier before it instigates a broad social-engineering intervention, or allows corporations to exploit fear-based sentiments”, wrote Professor Rancourt.

Rancourt also emphasized that people should learn the fact that “there is no known benefit arising from wearing a mask in a viral respiratory illness epidemic, and that scientific studies have shown that any benefit must be residually small, compared to other and determinative factors”, since these are publicly funded science straight out from peoples taxes. He then concluded in the article:

“The present paper about masks illustrates the degree to which governments, the mainstream media, and institutional propagandists can decide to operate in a science vacuum, or select only incomplete science that serves their interests. Such recklessness is also certainly the case with the current global lockdown of over 1 billion people, an unprecedented experiment in medical and political history.”

Meanwhile, aside from the scientific literatures/links cited in Rancourt’s article, the National Center for Biotechnology Information (NCBI) itself has published a study entitled “Microbial Contamination on Used Surgical Masks among Hospital Personnel and Microbial Air Quality in their Working Wards: A Hospital in Bangkok” in 2014; six years ago. The paper concluded that “high bacterial contamination on outside area of the used masks was demonstrated, and it showed a significant correlation with microbial air quality of working wards”. (The link to this study will be posted below.)

So it must be clear that the World Health Organization (WHO) and other major government health agencies themselves are ignoring these scientific studies. This is why many experts around the world are still calling for the public and the official’s attention to end this very unhealthy “mask wearing policy”. Therefore, we as citizens also must help this effort by educating others in whatever ways we can.

To leave you with more scientific reasons why “mask wearing policy” is a human rights abuse that leads to long-term health damages, we would also like to share the transcript of Dr. Margarite Griesz-Brisson’s video calling for the suspension and complete ban of prolonged mask wearing. This video was transcribed and posted by Henna Maria, which the link we will post below.

“URGENT! This is one of the most important posts I have ever made, please read it. I have written a transcript of the highlights from Dr. Margarite Griesz-Brisson’s recent extremely pressing video message, that was translated on-air from German into English by Claudia Stauber.

Dr. Margarite Griesz-Brisson MD, PhD is a Consultant Neurologist and Neurophysiologist with a PhD in Pharmacology, with special interest in neurotoxicology, environmental medicine, neuroregeneration and neuroplasticity. This is what she has to say about masks and their effects on our brains:

“The rebreathing of our exhaled air will without a doubt create oxygen deficiency and a flooding of carbon dioxide. We know that the human brain is very sensitive to oxygen depravation. There are nerve cells for example in the hippocampus, that can’t be longer than 3 minutes without oxygen – they cannot survive. The acute warning symptoms are headaches, drowsiness, dizziness, issues in concentration, slowing down of the reaction time – reactions of the cognitive system.

However, when you have chronic oxygen depravation, all of those symptoms disappear, because you get used to it. But your efficiency will remain impaired and the undersupply of oxygen in your brain continues to progress. We know that neurodegenerative diseases take years to decades to develop. If today you forget your phone number, the breakdown in your brain would have already started 20 or 30 years ago.

While you’re thinking, that you have gotten used to wearing your mask and rebreathing your own exhaled air, the degenerative processes in your brain are getting amplified as your oxygen deprivation continues.

The second problem is that the nerve cells in your brain are unable to divide themselves normally. So in case our governments will generously allow as to get rid of the masks and go back to breathing oxygen freely again in a few months, the lost nerve cells will no longer be regenerated. What is gone is gone.

I do not wear a mask, I need my brain to think. I want to have a clear head when I deal with my patients, and not be in a carbon dioxide induced anaesthesia.

There is no unfounded medical exemption from face masks because oxygen deprivation is dangerous for every single brain. It must be the free decision of every human being whether they want to wear a mask that is absolutely ineffective to protect themselves from a virus.

To deprive a child’s or an adolescent’s brain from oxygen, or to restrict it in any way, is not only dangerous to their health, it is absolutely criminal. Oxygen deficiency inhibits the development of the brain, and the damage that has taken place as a result CANNOT be reversed.

The child needs the brain to learn, and the brain needs oxygen to function. We don’t need a clinical study for that. This is simple, indisputable physiology. Conscious and purposely induced oxygen deficiency is an absolutely deliberate health hazard, and an absolute medical contraindication.

An absolute medical contraindication in medicine means that this drug, this therapy, this method or measure should not be used – is not allowed to be used. To coerce an entire population to use an absolute medical contraindication by force, there must be definite and serious reasons for this, and the reasons must be presented to competent interdisciplinary and independent bodies to be verified and authorized. When in ten years, dementia is going to increase exponentially, and the younger generations couldn’t reach their god-given potential, it won’t help to say “we didn’t need the masks”.

How can a veterinarian, a software distributer, a business man, an electrical car manufacturer and a physicist decided on matters regarding the health of the entire population? Please dear colleagues, we all have to wake up. I know how damaging oxygen depravation is for the brain, cardiologist knows it for the heart, the pulmonologist knows it for the lungs. Oxygen deprivation damages every single organ.

Where are our health departments, our health insurance, our medical associations? It would have been their duty to be vehemently against the lockdown and to stop it and stop it from the very beginning. Why do the medical boards give punishments to doctors who give people exemptions? Does the person or the doctor seriously have to prove that oxygen depravation harms people? What kind of medicine are our doctors and medical associations representing?