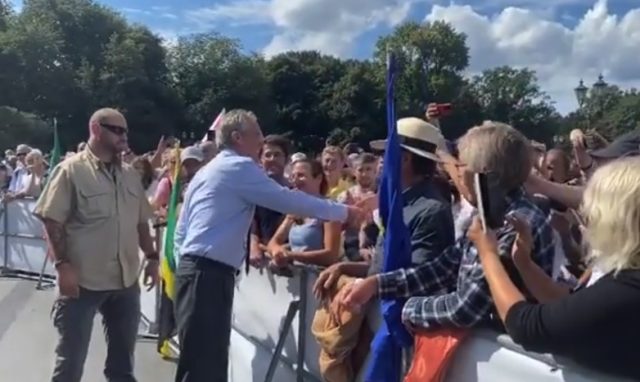 Supporting the invitation of the organizers of the recent rally in Berlin, which occurred on the 29th of August and was attended by various political organizations and individuals, Robert F. Kennedy Jr. stirred the crowd though his 12-minute speech detailing how the elites and the richest billionaires of the world are using their political power, technology, and influence to totally establish their cruel and inhumane plans for the world by using the medical establishment, the big tech, and fake crises such as the current fake pandemic. According to him:

“The pandemic is a crisis of convenience for the elites who are dictating these policies. It gives them the ability to obliterate the middle class, to destroy the institutions of democracy, to shift all of our wealth, all of us to a handful of billionaires to make themselves rich by impoverishing the rest of us.”

As Kennedy reminded the German people of Berlin’s role in confronting “global totalitarianism”, many cheered and showed approval by giving applause.

The recent demonstration in Germany, as many in the social media believe, was the second largest held since less than a month ago. Kennedy also said that the corporate-owned corrupt mainstream media in America are telling the American people he came to Berlin “to speak to about five thousand Nazis“. He then answered this by saying:

As a veteran activist himself, Kennedy then dissected why the same autocratic crony-capitalist government that manufactures problem to justify their unacceptable policies and war, have also manufacture this current pandemonium from a deadly invisible disease in a very concise way:

“Governments love pandemics. They love pandemics for the same reason they love war. Because it gives them the ability to impose controls on the population that the population would otherwise never accept. Their institutions and mechanisms are orchestrated, imposing obedience…”

Robert F. Kennedy then pointed out the inconsistencies of the policy think tanks, one thing that made people around the world suspicious, questioning the many contradictions with regards to policies and protocols in dealing with this fake crisis:

“It’s a mystery to me that all of these big important people like Bill Gates and Tony Fauci have been planning and thinking about this pandemic for decades. Planning it so we will all be safe when the pandemic finally came. And yet, now that it’s here, they don’t seem to know what they are talking about. They are making it up as they go along. They are inventing numbers. They cannot give us a PCR test that actually works. They have to change the designation of Covid on the death certificates constantly to make it look more and more dangerous. The one thing they are good at is pumping up fear.”

He then continued by raising the issue of the 5G roll out:

He also explained how the masses are being deceived by the big tech through their advertisements:

“And we all see these advertisements on the television saying 5G is coming to your community. It’s gonna be a great thing for all of you. It’s gonna change your lives, it’s going to make all the lives so much better.”

Kennedy also said that these technologies being rolled out right now in the midst of the fake pandemic are not really made to help people but to further make the control mechanism efficient. He said, “The reason is for surveillance and data harvesting; it’s not for you and me, it’s for Bill Gates, Mark Zuckerberg, and it’s for Jeff Besoz…”

He then backed this up by claiming:

In the middle of his speech, Robert Kennedy Jr. said something very important which is: “the only thing a government needs to make people into slaves is fear“.