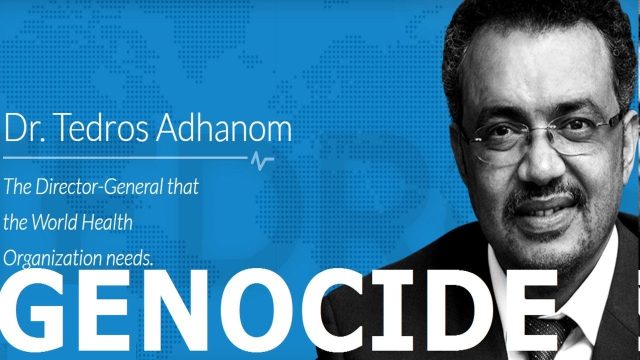 In 2017, the ECADF / ecadforum.com published a paper created by the Amhara Professionals Union (APU) in Washington D.C. regarding Dr. Tedros Adhanom, proving that the current WHO director is “unfit to be one of the finalists for the appointment of WHO Director General”. The document highlights the human rights violations said to have been committed by Adhanom, under his former Ethiopian communist political party, the “Tigray People’s Liberation Front (TPLF)”.

As written by John Martin in his mind-blowing piece “The crimes of Tedros Adhanom” last March of this year:

“The Amhara people denounced systematic discrimination and human rights violations by the current government. “Humans Rights Watch” in 2010 has written a report on how aid in the form of food and fertilizers has been banned from local villagers in Amhara because of their affiliations with the opposition party. Other forms of refusal of aid involved the refusal of emergency health care by the ministry of health workers; the same ministry that was led by Tedros Adhanom at the time.”

Explaining about the problems within these institutions in relation to how the WHO selects officials, Martin also wrote on this article:

“The appointment of someone as profoundly unqualified as Tedros owes much to the labyrinthine structure of the WHO appointment process. The director is selected by the board of directors, which in turn is appointed by a rotating minority of the Assembly, made up of health ministers appointed by world governments. WHO therefore has the same problem as many other global institutions, where the director is an appointee of an appointee, an emissary of someone who could have been legitimately elected. So when you get to the director, the democratic mandate has been so small that it is almost meaningless.”

Meanwhile, the “Association Ethiopian Human Rights & Democracy Task Force in Switzerland” created a petition on the same year. The petition in change.org says:

“The Ethiopian diaspora is still shocked by the selection of this candidate by the EXECUTIVE COUNCIL OF THE WORLD HEALTH ORGANISATION (WHO) because this man is one of the most terrible murderer under the current government and he won’t stop to continue to murder thousands of Ethiopian citizens if we don’t take any action right now. How can we accept a murder for a high position in the WHO, one of the biggest institution of the United Nations which believes in the protection of Human Rights around the world and especially in health issues? This is the big question a lot of Ethiopians are asking themselves whereas Tedros Adhanom Ghebreyesus is worldwide criticised for being responsible for the death of millions of Ethiopians, some of which are in jail, suffering torture and maltreatment.”

On the other hand, Bill Gates, under his pseudo-philanthropic front the Bill and Melinda Gates Foundation (BMGF), as one of the major financiers for WHO, display confidence as the current loudest voice for the so-called health measures. However, this is seemingly the case even way back many years ago. Thanks to various organizations, now there are quite many internet access providing real documents revealing how influential these individuals and institutions to the WHO are, making it impossible to go astray from the very observable direction and narrative they are taking. Anyway, to grasp the whole point of the open letter, here it is:

The Amhara Professionals Union (APU) presents you objective facts about Dr. Tedros Adhanom Ghebreyesus proving that he is unfit to be one of the finalists for the appointment of WHO Director General, let alone to win and assume the role in few months.

Amharas are one of the most populous ethnic groups in Ethiopia comprising over one third of population. The Amhara Professionals Union (APU), which is a non-profit advocacy group for the causes related with the Amhara, is a Washington D.C. based Civic organization comprised of Medical Doctors, Scientists, Lawyers and other Professionals of Amhara descent all over the world organized to defend the rights and interests of the Amhara people against the heinous crimes the current TPLF/EPRDF led regime has been committing for over twenty five years. APU believes that not only is Dr. Ghebreyesus a very poor choice for the job, he is also an embarrassment to the core values of WHO.

One of the core principles in the constitution of WHO reads: “Informed opinion and active co-operation on the part of the public are of the utmost importance in the improvement of the health of the people”. We at the APU share the following statement about Dr. Ghebreyesus’s candidacy and have attached a paper that exhibits the candidate’s overall record at the helm of the Ministry of Health and Foreign Affairs of Ethiopia in more than a decade.

If we were to consider only our Ethiopian or African background, we, members of the Amhara Professionals Union (APU), could have simply supported the candidacy of Dr. Tedros Adhanom Ghebreyesus for WHO’s Director General position. However, we believe that WHO, as an International organization with extended reach throughout the world, should be led by someone who has a proven record of accomplishment of serving human beings without prejudice and shows respect to all human kind irrespective of their ethnic background or religion. As APU, we evaluate individuals based on their competence and past track records regardless of their ethnic, religious or regional background. Dr. Ghebreyesus should be judged based on his role as Minister of Ethiopian Federal Ministry of Health (FMOH), Minister of Foreign Affairs and as a politburo member of the Tigray People’s Liberation Front (TPLF), a political party that is the most powerful within the Ethiopian People’s Revolutionary Democratic Front (EPRDF) led government of Ethiopia.

Human Rights Watch and many other National and International Organizations have widely criticized TPLF/ EPRDF led government for crimes against Humanity and atrocities towards the Ethiopian people. The attached document provides objective evidences why APU believes Dr. Ghebreyesus lacks the competence, impartiality, accountability and transparency that we feel are required for a position of this magnitude. The document highlights the following:

The candidate has failed to be transparent by forcing the Ethiopian Ministry of Health to not report and cover up a Cholera epidemic throughout his tenure by simply renaming a deadly epidemic as an Acute Watery Diarrhea (AWD) even after the diagnosis of Vibrio Cholerae was confirmed. His priority in deciding so was to conceal the impact a public admission of Cholera epidemic might have on Tourism and image of his Party rather than protecting the international community and attempting to reach out to the affected areas. Such a sad error due to lack of judgment resulted in a nationwide epidemic.

The candidate has treated his own citizens differently based on their ethnicity contrary to WHO’s goal of building a better, healthier future for all people throughout the world. While WHO strives to better the lives of underserved and marginalized communities, Dr. Ghebreyesus who descends from Tigre ethnic group disfavored the “Amhara Regional State” through poor health care. For instance, disproportionately high mortality coupled with selective application of contraceptives use has led to a selective reduction of the growth rate of the Amhara people. Such disparities were created and gaps increased across all measures of health in his leadership tenure. Of particular importance is the unexplained 2.5 million decrease in the Amhara population under his healthcare leadership. The Amharas were victimized and punished due to their ethnic background.

We understand that accountability, integrity, transparency and honesty are among WHO’s core ethical principles. Sadly, Dr. Ghebreyesus has failed to meet all these standards while he assumed his role in the aforementioned posts. Therefore, we at the APU, believe that it would be a travesty of justice if WHO awards its highest position to a person who violated WHO’s core principles and whose deliberate actions and inactions have claimed the lives of millions of Amhara people as well as other Ethiopians.

We urge WHO members to look at the attached review of the data that have been published by the Ethiopian FMOH, and learn how Dr. Ghebreyesus and his associates systematically discriminated against the Amhara people in Ethiopia while preferentially treating others with a high level of open partiality. We at the APU thank you in advance for the attention you give to the attached document entitled “International Organizations Leadership Recruitment Policies: the Failed Experiment of Dr. Tedros A. Ghebreyesus Candidacy for WHO Director General position”.

If you have any questions or need further explanations, please do not hesitate to contact us at any time.