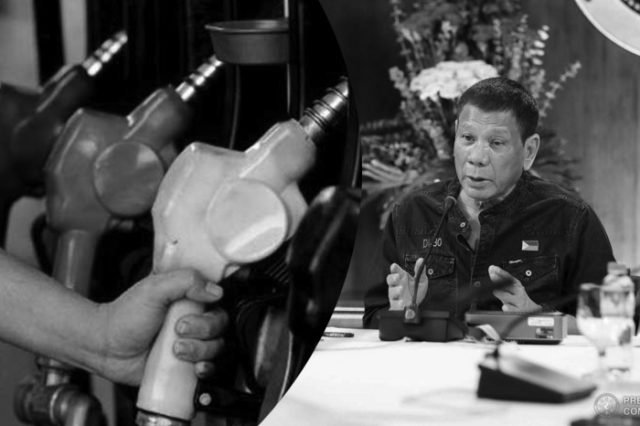 A few hours after President Rodrigo Duterte claimed that people can use petrol as disinfectant, the Integrated Chemists of the Philippines (ICP) warned on their Facebook page that “Gasoline must not be used as a disinfectant” and adding that ”this can be harmful to humans especially when inhaled”.

Meanwhile, Reuters also released a report with the statement of Jose Santiago, the President of the Philippine Medical Association (PMA), saying:

“You cannot use gasoline as disinfectant. Inhaling it may cause harm and could lead to more problems like respiratory disease.”

According to Medical News Today:

They also list these symptoms which commonly follow gasoline vapor exposure include: headache, weakness and fatigue, staggering, difficulty breathing, blurred vision,  dizziness or lightheadedness, slurred speech, convulsions, heart failure, flushing of the face, wheezing, coughing, and even coma. Adding to this, they also listed this as “symptoms of gasoline poisoning” – whether a person has touched, swallowed, or inhaled gasoline, how much gasoline they had exposure to, the length of exposure, their age, body weight, and sex whether they also had exposure to other chemicals.

As recorded for television broadcast last Friday, President Duterte oddly claimed again that “people can use alcohol or gasoline to clean their masks”. According to him:

“It’s okay if you reuse it as long as you spray alcohol. If you don’t have a disinfecting spray, you can disinfect it with gasoline or diesel. The coronavirus will die.”

This claim was publicly stated by the president twice, but the first remark was dismissed by officials as a joke. The first time was on July 21 in which he said that “those who didn’t have cleaning supplies could use gasoline as a disinfectant to clean their masks”. According to him:

“At the end of the day, hang [the mask] somewhere and spray it with Lysol if you can afford it. For people who don’t have Lysol, drench it in gasoline or diesel… just find some gasoline and dip your hand with the mask in it.”

Meanwhile, the Philippine Presidential Spokesperson, Harry Roque, quickly retracted the next day reasoning that ”Duterte was once again joking when he said gasoline or diesel can serve as a disinfectant”. However, during the second time of the same statement, Duterte said while acting strangely, causing confusion to some:

“What I said is true. Just go to the gasoline station, and then have some drops, that’s disinfectant. I am not joking. That is true. You think I am just kidding.”

The president also defended his psychological reputation by saying that if he has a mental disorder, he would not be a president. According to Duterte on a Filipino national dialect:

“They said Duterte is a crazy. Idiot, if I was a fool, you should have been President, not me.”

“A YouGov online survey found that Filipinos who rated the Duterte government’s response to the virus as “very well” or “somewhat well” fell from 72% in May to 51% on 29 June.

Filipino pollsters – who have repeatedly recorded strong approval ratings for the President – haven’t been able to do door-to-door surveys during the outbreak.”

Featured Photo: PCOO | President Rodrigo Roa Duterte talks to the people after holding a meeting with the Inter-Agency Task Force on the Emerging Infectious Diseases (IATF-EID) core members at the Malago Clubhouse in Malacañang on July 30, 2020. | Gasoline Photo by PhilStar | Merged by Weblyf Team