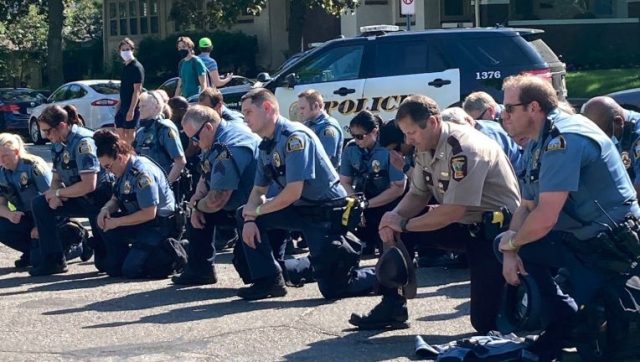 In the recent weeks, people witnessed police officers kneeling to protesters at demonstrations across America. However, as always, Americans have mixed reactions regarding this topic. This is inevitable since these successive days of protest by ordinary citizens angry not only because there was a black man who allegedly died from the hands of police officer in front of a camera but also because of personal financial or economic issues caused by the so-called COVID-19 lockdown.

So people took to streets daily to protest against these things while Black Lives Matter (BLM) called for “police reform and an end to police violence”. Of course, there have been worst reactions from the part of the police as “there have also been reports of police officers driving squad cars into crowds, attacking people with pepper spray and batons, and shooting rubber bullets at journalists and demonstrators”.

Meanwhile, it’s quiet curious that some police officials do not agree with the kneeling. David Blunkett, former Home Secretary, cautioned that this gesture might pull the force into not favorable situation by being politicized. Blunkett said:

“I am concerned that the gesture of kneeling, though prompted by the best instincts, might give the perception of undermining the role of the police in such situations.”

“They are there to ensure a safe demonstration, not to make political statements.”

Meanwhile, the new president of the Chicago Fraternal Order of Police, John Catanzara, stated to Fox32 Chicago that “he didn’t believe the current Black Lives Matter protests that broke out after the death of George Floyd were the “time or place” to be kneeling”.

“If you kneel, you’ll be risking being brought up on charges and thrown out of the lodge. This was about defunding and abolishing the police officers. And you’re going to take a knee for that? It’s ridiculous.”

While the president of Chicago’s police union threatened that “officer who kneels with Black Lives Matter protestors could be kicked out of the organization”, on the other hand the Hertfordshire police officials said:

“Officers working at events involving the Black Lives Matters movement are free to demonstrate their personal support by ‘taking the knee’ should they wish. The force has not sought to either encourage or discourage this action, which remains a personal choice.”

Meanwhile, in a short video posted in social media showing the same issue of police gesture to protesters, several netizens from the US reacted. On the video, many users expressed their thoughts of refusal and disappointment in an honest way. Here are some of the comments to the said video:

It’s fucked up… you asked. Now, how much respect do you have for these officers? They are going to bow down.. to whom? for what? I say stand your asses up and the next time you see a wrong happen, do something… just don’t kneel down, we need you to stand up!!!

Would have been better if they had all knelt together, in solidarity and prayer- rather than a bowing down type of gesture.

Absolutely no kneeling before them. Shake his hand. Speak to each other freely but hell no to the kneeling.

I was all for it until I saw the kneeling. I mean it’s great that it happened and they meant well, but the kneeling is a bit too far. I don’t believe people should even kneel for the Queen of England.

I agree with the unity of the shaking hands, don’t know about the kneeling though. No one should kneel to anyone.

There’s no way. Don’t get me wrong. I have the utmost respect for law enforcement. They’ve been put through hell. The last thing they need to do is bow down.

hey’re allowing them to exercise their rights to protest. I’m all in favor of that. What point does kneeling down to protestors prove? Kneeling is an act of submission.

No. They can shake hands but not kneel. It is showing submission and not appropriate for law enforcement.

No no no!! I will not take a knee or bow down to anyone…. This is a sign of submission, time to rise up above all this nonsense! Shaking hands is good and should have ended there!!

I don’t get it. Why are they kneeling down for? That’s not a sign of respect is more of submission which leads me to believe that in this action they’re in agreement with everything that they have caused in return.

No. I don’t agree. I only kneel to my maker. I’m surprised to see this here but whatever. To me kneeling to this or a vaccine is the SAME. This solves nothing. People are still looting, rioting, murdering. This is not an example of bridging the racial divide.

I don’t understand why would anyone want another person to kneel to them. I wouldn’t want to make anyone feel below or less than me. Feels like some form of mental abuse.

Ridiculous to give up respect and authority for a video that is foolish. There is no way those rioters/protesters respect them for bowing down. It’s embarrassing. So now they are all changed for the better? Over what?

This is THE most disgusting video thus far since this idiocy started. They can kill all the officers they want & expect all police to bow. Such blatant racism right here. You people are destroying the peace not creating it.