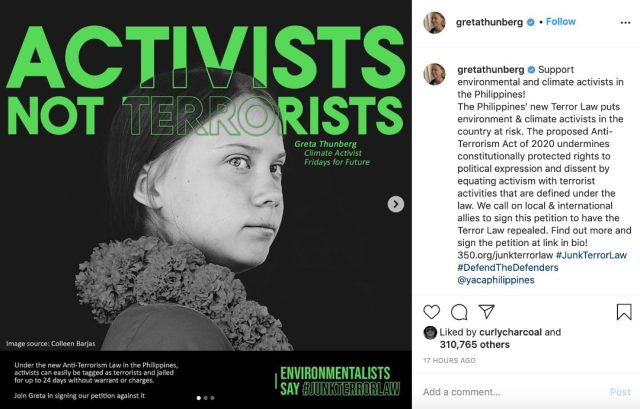 Greta Thunberg, the teenage Swedish environmental activist who became famous for a so-called school “climate strike”, has joined the petition against “anti-terrorism law” that has just been signed by President Rodrigo Duterte in the Philippines. The young girl who is gaining more support right now from various leftists groups and politicians has participated in the call to revoke the fast-tracked anti-terrorism bill due to the concern that it will be abused and used to strengthen the law against people’s rights, especially including those who “defend freedom, human rights and the environment”.

According to the petition:

“The ‘terror law’ is a draconian measure that would  worsen the already atrocious human rights situation in the Philippines, previously tagged as the world’s deadliest country for land and environmental defenders in 2019”.

The controversial bill which was signed by the president early this month was feared by some environmentalists could be used against them and for discouraging Filipinos from protecting the country’s natural resources and environmental interests. This is the reason why people from different backgrounds and from across the world, including celebrities and other famous personalities, have supported the petition on the internet as it will help support the protection of the remaining undeveloped and uncommercialized natural environments, including huge forests, mountains, and oceans. The eight separate petitions are now being considered at the Supreme Court while petitioners are waiting for proper response from authorities.

According also to the petitioners:

“In the first three years of the Duterte administration, environmental defenders and advocates have been attacked in all fronts as they protect at least 6.2 million hectares of watershed forests, agricultural lands, coasts and seas.”

“Environmental defenders and advocates also stand up against transnational mining companies, big logging and agribusiness, and infrastructures that are considered by government as ‘vital installations’ and ‘critical investments.”

Meanwhile, according to Leon Dulce, the national coordinator of the Kalikasan People’s Network for the Environment and also “a resource person in the Commission on Human Rights National Inquiry on Human Rights Defenders” in 2019:

“It is a desperate attempt to hide the stark realities we environmental defenders experience where indigenous Tuwali barricaders enforcing a mine suspension order in Nueva Vizcaya were violently dispersed by police. It is a reality where a lawyer litigating a massacre of farmers involved in a land struggle in Negros is easily assassinated; where even the government’s own environment officials in the last ecological frontier of Palawan were held at gunpoint and arrested by a city police director for investigating destructive activities he is involved in.”

It was reported that in 2019, “47 environmental defenders were killed in the country bringing “53-percent increase from 30 deaths recorded in 2018”. This is also according to the group Kalikasan-People’s Network for the Environment. Because of this, the Philippines has been known from this as “the deadliest country in the world for land and environmental defenders”.