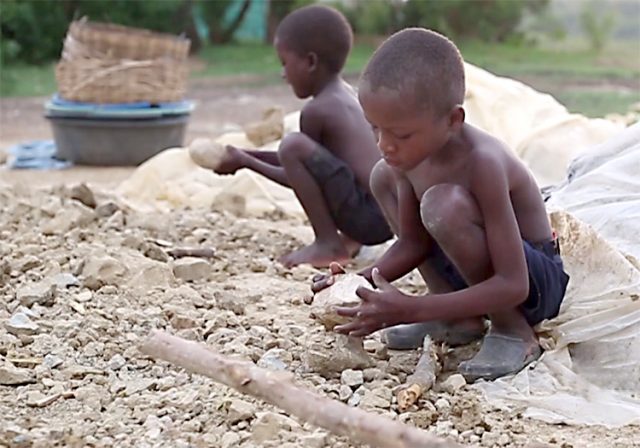 The fourth edition of the Diagnostic and Statistical Manual for Mental Disorders of the DSM-IV classifies geophagia, the practice of eating dirt, as a type of pica, “an eating disorder in which people consume things that are not food”. However, several studies have proven that this is a wide-spread practice not only among different human cultures but also with other animals for various considerable reasons and so not really an abnormal behavior at all rather an adaptive one. It exists for millennia and some of the reasons studies are looking are the minerals and detoxifying agents found in soils. And perhaps, people instinctively see dirt as part of nature where food comes from therefore, edible.

According to scientists, records of geophagia dates back at least during the time of Hippocrates, a famous Greek physician, in 460 BC. It was said that ancient Egypt and Mesopotamia use clay as medicines through plastering and also ingesting “to treat ailments” in the stomach. Meanwhile in the 19th century Europe, geophagia was also said to have been practiced. Some indigenous tribes such as in the Americas was also said to use dirt as a spice. In the animal kingdom, researchers have also “observed geophagia in more than 200 species of animals, including parrots, deer, elephants, bats, rabbits, baboons, gorillas and chimpanzees”.

Meanwhile, a nutritional anthropologist at Cornell University named Sera Young who wrote a book on the subject called Craving Earth: Understanding Pica — the Urge to Eat Clay, Starch, Ice, and Chalk, thought that slaves from sub-Saharan Africa brought this practice to the US during the trans-Atlantic slave trade and concluded that “geophagy is a widespread behavior in humans that occurs during both vulnerable life stages and when facing ecological conditions that require protection.” She was also convinced that it was already practiced among Native Americans long before Columbus’ conquest.

In one study, it was concluded that:

“For centuries, indigenous peoples have routinely used clays (decomposed rock, silica and aluminum or magnesium salts, absorbed organic materials) in food preparation. The clays were used to remove toxins (e.g., in aboriginal acorn breads); as condiments or spices (in the Philippines, New Guinea, Costa Rica, Guatemala, the Amazon and Orinoco basins of South America); and as food during famine. Clays were also often used in medications (e.g., kaolin clay in Kaopectate). But the most common occasion for eating dirt in many societies (the only occasion in some societies) is pregnancy. When sperm and egg collide, the world changes. That is obvious. But why pregnant women eat dirt is not.”

Interestingly enough, scientists up to now cannot still come to a final consensus why do modern humans practice geophagia. As always, minerals from dirt such as iron, calcium, and zinc are most commonly thought as answers. Of course, humans and animals need these minerals on their diet. However, some think this is simply because of necessity such as food shortage while others suggest that this is for detoxing the body. In Haiti, the former is surely the case. Unfortunately, people in Haiti were forced to eat “mud cookies” due to lack of food supply.

Meanwhile, to know more possible answers, let’s take a look at another study:

“Young and her colleagues analyzed reports from missionaries, plantation doctors, explorers, and anthropologists to put together a database of more than 480 cultural accounts of geophagy. The database includes as many details as possible about the circumstances under which earth was consumed, and by whom. The researchers could then use patterns in the data to evaluate each potential explanation. They found the hunger hypothesis unlikely. Studies in the database indicate that geophagy is common even when food is plentiful. Moreover, when people eat dirt they tend to eat only small quantities that are unlikely to fill an empty stomach.”

Meanwhile back to the nutrition as the main reason, here is what another study suggests:

“The fact that an animal’s need for these minerals changes with the seasons, with age and with overall health may explain why geophagia is especially common when an animal’s diet does not provide enough minerals or when the challenges of the environment demand extra energy. Mountain gorillas and African buffalo that live at high altitudes may, for example, ingest earth as a source of iron that promotes red blood cell development. Elephants, gorillas and bats eat sodium-rich clays when they do not get enough sodium in their diet. One elephant population is known to continually visit underground caves where the animals dig up and eat salt-enriched rock.”

“Among human populations in Africa, those who have ready access to calcium do not practice geophagia as often as those deprived of calcium. The need for calcium may also partly explain why geophagia is most commonly associated with pregnancy: a mother needs extra calcium as the fetal skeleton develops.”

In another study, this is also what they have concluded:

“Wiley and Katz have proposed that eating clay serves different purposes during different periods of pregnancy, soothing stomach upset during morning sickness in the first trimester and supplementing nutrients (especially calcium) during the second and third trimesters, when the fetal skeleton is forming. This type of geophagy occurs most commonly in cultures of sub-Saharan Africa and their descendants. The timing of dirt ingestion and amounts consumed vary with tribes and individual persons, but soil comes consistently from certain sites. In some cultures, well-established trade routes and clay traders make rural clays available for geophagy even in urban settings.”

Then, it continued observed:

“Clays from termite mounds are especially popular among traded clays, perhaps because they are rich in calcium. Whatever the underlying reason, geophagy in Africa does not appear to be a recent cultural development; it may predate Homo sapiens. Women eat dirt during the first, second, or third trimester or throughout pregnancy, often throughout the day, as a supplement rather than a meal. Most commonly consumed are subsurface clays, especially kaolin and montmorillonite, 30 g to 50 g a day (sometimes much more). However, eating dirt is not always confined to pregnant women, even among the cultures of sub-Saharan Africa, nor is it limited to tribes with little or no access to dairy-derived calcium, so these hypotheses do not adequately explain local tastes for dirt.”

On the other hand, dirt eating by pregnant animals was also well-observed. In this case, in bats. Here’s what happened:

“A 2011 study in PLoS ONE asked whether Amazonian bats visit clay licks—cliff sides of exposed clay—for nutrition or detoxification. Christian Voigt of the Leibniz Institute for Zoo and Wildlife Research in Berlin and his colleagues captured bats of two different species: one that eats mostly fruit and one that eats mostly insects. If the bats were eating clay for minerals, Voigt predicted, he would find fewer fruit-eating bats at the clay licks because fruits have more dietary minerals than insects. But most of the bats he captured at the clay lick were fruit-eating bats—and many of them were pregnant or lactating. Voigt concluded that the pregnant fruit bats visited the clay licks to detox because they were eating twice as much to feed their babies, which meant twice the dose of plant toxins from unripe fruits, seeds and leaves.”

“Like bats, pregnant women may also eat dirt for its detoxifying properties, in addition to using dirt as a supplemental source of minerals. The first trimester of pregnancy plagues many women with nausea and vomiting, and cross-cultural studies document geophagia early in pregnancies in response to morning sickness. Women in sub-Saharan nations and in the southern U.S. have reported that they consume clay to alleviate this discomfort. Some researchers have proposed that morning sickness purges the mother of toxins that might harm the fetus…”

Apparently, as long as the soil is safe, geophagia is very helpful when famine happens. But of course, it is also important for people to remember that geophagia also poses threat especially in urban areas. This activity can be very detrimental especially when the soil is contaminated with industrial pollution such as plastic garbage, chemical wastes, and heavy metals. Not only that, there are also various infectious agents, pathogens, and parasites existing in some areas. According to another discovery:

“Most infectious diseases acquired through eating dirt are associated with childhood geophagy, which routinely involves topsoils rather than deep clays. One recent report describes infection of two children at separate sites with raccoon roundworm (Baylisascaris procyonis ). The infection resulted in severe neurologic damage to both children, and one died. The roundworm was ingested along with soil in both cases. Eating dirt can have dire consequences.”

“In the United States, the most common parasitic infection associated with geophagy is toxocariasis, most often caused by the worm Toxocara canis. Seroprevalence is 4% to 8% depending on the region, but incidence of antibodies to T. canis is as high as 16%–30% among blacks and Hispanics. The most common route of infection is ingestion of soil contaminated with dog or cat feces. Even though, humans are only paratenic hosts of T. canis, under some circumstances (though severe cases are rare), the worm can cause considerable damage (visceral larva migrans, ocular larva migrans, urticaria, pulmonary nodules, hepatic and lymphatic visceral larva migrans, arthralgias). Toxocara eggs persist in soil for years.”