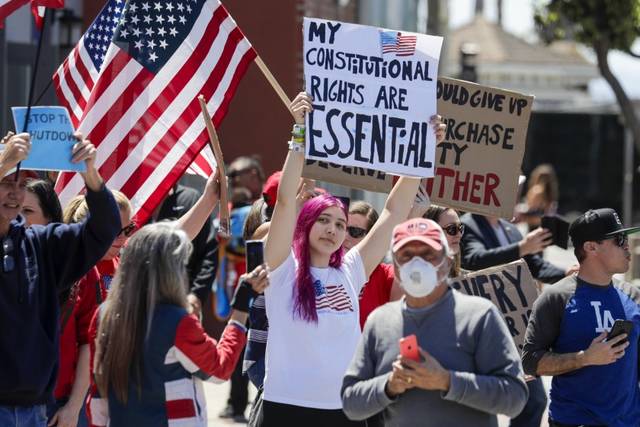 Since early April, citizens all over America have been protesting against the ‘stay-at-home’ policy as they think this is unconstitutional. These protests were also supported by several police officers and other county officials, claiming they do not want to participate in unjust laws suspending people’s freedom and right to peaceably assemble.

One example is Loren Culp, the Chief of Police in Republic, Washington, and Republican gubernatorial candidate. This is what he said:

“Just because there’s crisis going on doesn’t mean we should give up our liberties and it definitely means that our republic servants should not be trying to take our liberties away from us. Yeah, there are all kinds of laws on the books, right? That doesn’t make them moral; that doesn’t make them just. Recommend strongly that they don’t go anywhere; that they don’t be among a lot of people because it will spread and make it worst. But don’t be a dictator and tell the citizens what they’re gonna do.”

Meanwhile, Sheriff Darrel Wheeler of Bonner County also wrote an open letter to Governor Brad Little and posted the letter to the BCSO Facebook page Thursday. These are some of the words he said:

“I do not believe that suspending the constitution was wise, because COVID-19 is nothing like the plague. We were misled by some Public Health Officials, now it is time to reinstate our Constitution.”

President Donald Trump also seems not totally in agreement with this measure. Aside from being strongly skeptical about the World Health Organization’s (WHO) data, which he called “unreliable”, he also showed support to citizens who protested against the ‘stay-at-home’ orders and wanted people to continue doing their daily business but with proper measures and responsible actions. This is what Trump said on March 23:

“We can’t have the cure be worse than the problem. We have to open our country because that causes problems that, in my opinion, could be far bigger problems.”

Another one is Judge Andrew Napolitano, a New Jersey Superior Court judge from 1987 to 1995. This is what he said on Fox News interview:

“When these governors tried to write law, rather than enforce law that the legislatures written, they violate the federal constitution, they violate the United States constitution. And in the case of Governor Murphy of New Jersey who said that the Bill of Rights is above his pay grade, that’s a felony of misconduct in office; the impeachable offense for governor, either knowingly or negligently to crash civil liberty as these governors have done.”