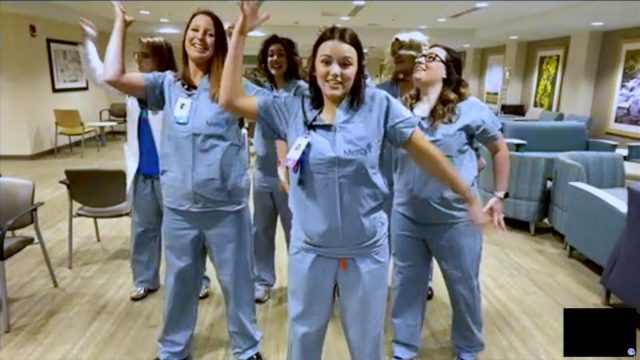 Many people are reacting these days against these worldwide trending videos of doctors and nurses circulating on the internet. These videos, which is being shared on various social media platforms, have baffled many critical thinking people because it suggest a contradicting “narrative” to the supposed global deadly, according to health authorities and the mainstream media, coronavirus pandemic.

Aside from another trending campaign called #filmyourhospital in which people are going to hospitals and filming videos about the reality that is happening, the video about dancing doctors and nurses is also raising legitimate questions right now from people who are skeptical about what the mainstream media is claiming what is happening in the hospitals across the US and also in Europe. The media is saying that the hospitals are in “total crisis” and many people are dying from COVID-19 everyday and that it looks like a “war zone”.

Therefore, it leads to various people raising questions: why is the media creating so much fear about the current situation? Why are they exaggerating their reports even though these clearly create so much panic to the general public? Do they have a hidden agenda behind their actions? Governments around the world keep telling people not to panic and not hoard essential goods from the supermarket, and yet the major media corporations are creating this “manufactured scenario” that is clearly bringing serious psychological harm to the people and leads them to do the opposite of what to government is saying.

In one of these many videos uploaded in Youtube, the owner commented:

“The hospitals look completely empty to me. During the “worldwide pandemic”, people are “dropping like flies” according to the media death is like rampant with this hellacious virus, as what we’re being told, yet all I see are smiles and jokes and choreograph ridiculous retarded dancing. I hope somebody can shed a light to me because these people look like absolute fools to me. Is this what we are supposed to do in the midst of a worldwide emergency?”

“How can this, this people be in such distress yet they’re dancing around like fools? I’m sorry, there’s something strange going on here. If these people were seeing death, like people just wasting away, they would not be in the mood to be dancing around and flailing their bodies around like absolute clown. There’s really something strange going on here.”