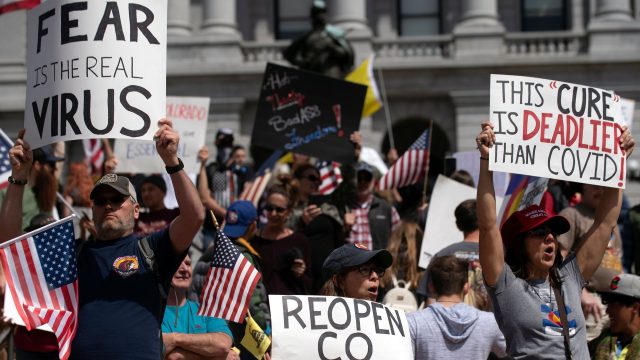 “LIBERATE MINNESOTA!” “LIBERATE MICHIGAN!” “LIBERATE VIRGINIA, ” These are the ‘tweets’ by President Donald Trump which inspired protests by Americans across the United States, calling for the end of the lockdown which has caused great economic destabilization and has pushed many citizens to file for unemployment. Because of this, people of various states took the streets, defying the ‘social distancing’ policy, to express their voice against the “stay-at-home” order imposed in response to the so-called COVID-19 crisis.

In Texas, hundreds of people, including veterans, gathered on the streets decrying the harsh impact of the lockdown policy by Governor Gregg Abbot. Many of these people wear military uniforms, carrying firearms while also defying the government’s protocol of wearing mask, which many scientists and microbiologists believed to be not effective, as part of the measures in avoiding infection. The mass protest in Texas happened on April 18 and said to be followed up as organizers and supporters were determined to re-open the state as their answer to the ongoing economic crisis.

Meanwhile, in Concord, New Hampshire, hundreds of demonstrators also bravely defied the ‘stay-at-home policy’ and took the streets together with children and elderly, holding signs saying “Live Free or Die in Lockdown”. The same thing also happened in Indiana, Kentucky, Nevada, Wisconsin, Maryland, Virginia, North Carolina, Florida, Idaho, Minnesota, Michigan, California, and Utah where many people questioned the inaccuracy of the ‘death rates’ data being reported on the news all over the US while demanding to go back to work.

Many of these people vented frustrations against the, according to these protestors, “unjustifiable lockdown policy”. Some of the signs saying – “Give Me Liberty”, “Demand The Choice”, “Fear is the Real Virus”, “Free People Make Their Own Assessment”, “COVID-19 is a Lie”, “My Body, My Risk, My Choice” and even “Texas Will Not Take the Mark of the Beast”.

On the interview, some protesters said, “Even if the virus were 10 times as dangerous as it is, I still wouldn’t stay inside my home. I’d rather take the risk and be a free person”. In Texas, hundreds gathered in state capitol calling for an end to restrictions. Many demonstrators sought an immediate end to restrictions, chanting, “Let us work!” According to reports, stores can soon begin to reopen and operate and hospitals can resume services. In Florida, people demanded to let them be free and return to their normal life, enjoying the beaches and parks.