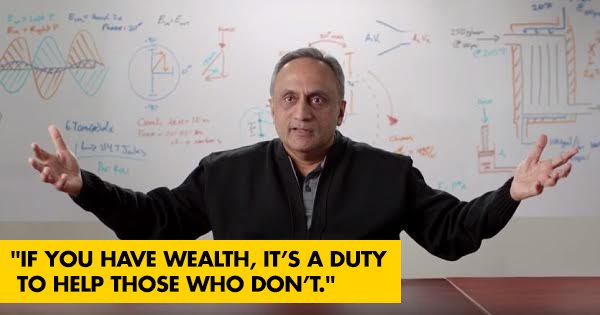 Unlike other billionaires, Manoj Bhargava has never been involved in any scandal or any law suits. He is not that famous to many but this man really deserves to be known by the public more and should be supported for so many reasons. Manoj Bhargava founded Billions in Change, an organization that creates efficient technologies that can help solve the main things that hinder most people in the poorest regions – the insufficient electricity, not enough healthy and sustainable food, and not enough safe water to drink. By providing these basic needs through their technological inventions, Bhargava and others believe people can be free from poverty.

“We came up with three fundamentals which defined a person’s well-being and on those three, everything else is built. They were electricity, water, and health. If you have those three and you’re not lazy, you’ll be fine; you’ll make a living. The number of things that happen once you have electricity is unending. It’s what created all the wealth in the world.”

Billions in Change envisions a world that has available and accessible clean water that is abundant especially for poor people, consistent supply of electricity, and a farm which also sustains the land. They believe that this availability will help enable the people to have a better health, education, and decent source of income that will fundamentally improve the well-being of families not only across India but also around the world. Through the aid of their technologies distributed around the world via zero-profit business model, Bhargava’s organization hopes to help recipients have productive lives and contribute for a better society and environment.

“If you look at the non-profit the problem is, since nobody has to produce anything, it’s not very efficient. And then a for profit model, well I’m not interested, we have enough money. SO we came up with this model which is you run it as efficiently as if it’s a real business but then you subsidize the price to the level where you have zero profit. If I can make this at zero profit, I can make unlimited amount.”

As a billionaire, Manoj Bhargava dedicates 99% of his wealth to his foundations. Their inventions are called the HANS PowerPack, Free Electric Bike, RainMaker for Brackish Water, RainMaker for Grey water, and the Shivansh Fertilizer (for specific descriptions on these technologies, please refer to the link given below). These inventions, Bhargava believes, will enable “lasting solutions to the world’s biggest problems”. In the said documentary film, Manoj Bhargava also stated:

“Lights, clean water and nutritious food are the foundation of health, education, and livelihood, without them it’s impossible to live a productive life and care for your family. The ultimate goal of these products is to get them rolling across the world. That’s what we need to do.”