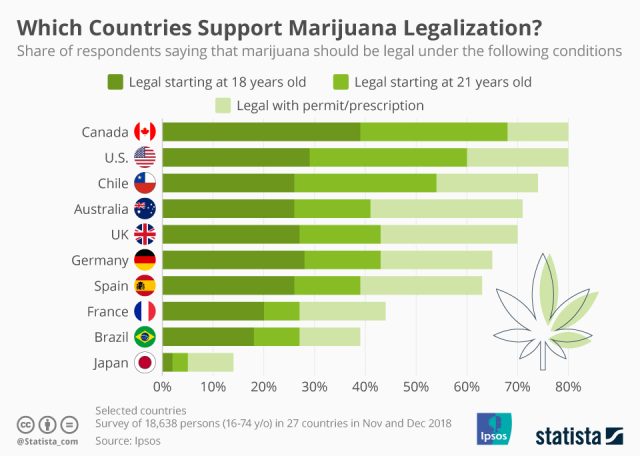 Following the United Nations Single Convention on Narcotic Drugs of 1961 along with the 1971 Convention on Psychotropic Substances and the 1988 Convention against Illicit Traffic in Narcotic Drugs and Psychotropic Substances, marijuana legalities differ by countries or states in terms of production, possession, use, sales and distribution, and cultivation. And for medical purpose, there are also differences when it comes to how it can be consumed, its quantities and qualities, and under what conditions.

It is important to know the differences between marijuana decriminalization, marijuana legalization and medical exemption. Using these terms interchangeably will cause confusion and sometimes danger to a person, especially for people in the US as it is composed of different states. Also, the federal laws on marijuana are different from the state laws. And lastly, in countries that are still advancing for their freedom to use marijuana either for recreational, medical, or industrial such as the Philippines, this is vital to understand in determining the specific law and the conditions that the advocates want to push.

Decriminalization is the removal of the criminal punishment by the state for the use of the substance no matter where it is coming from or where the person buys them. The state amends or repeals its law against the substance and does not regulate the production and the sale. However, there is a certain amount of limitation for possession and consumption but being caught will not result to imprisonment but only for a very minor penalization. However, those who are caught in possession or selling of “large quantities” will still be subjected to penalties. In the US for example, it is also important to know that the federal law does not allow the production and consumption of marijuana. It is still considered under controlled substance act even though that several states have already legalized the substance for recreational use. Oftentimes, the federal law is the one being followed whenever there is “conflict” between these laws.

Legalization refers to the abolishment of the ban against the consumption and the possession of the substance. It also refers to the “regulation and taxation” by the government on the selling and the use of it. Like in decriminalization, users cannot be subjected to arrest and harsh punishment. However, in different states there is different specific definition or classification of these laws. Like for example, there is a specific age bracket o limitations for the user and depending on the state laws, selling are either not allowed or limited. In Colorado and Washington for example, recreational use is only limited to the person 21 years of age and above. And also, there are specific state laws for taxation and licensing. In these 2 states as well, black market operation is illegal. If you are in the US, it is better to familiarize the specific laws in your state and it is safer to get your marijuana from legal source.

What about Medical Exemption?

Medical exemption refers to the use of marijuana for medical purposes. Medical use dates back from the ancient times, during 2757 B.C. Records show that for thousands of years, it was already being used in India, Egypt and China. In China, it was used in the ancient times as a tea to treat different kinds of illnesses. In the US, evidence shows that the first recorded medical use was during the late 18th century. However, the state legal use of the substance for medical purposes was only allowed since the past 2 decades; specifically in California during the year 1996. And in 2016, it was legalized by 29 states, including Washington DC. Later, other countries followed such as Canada, Uruguay, Czech Republic, Colombia, Australia, the Netherlands and just recently, Thailand. However, these countries have their own law specifications and conditions and not all of these counties allow recreational use. This year, there will be more countries planning to amend its law on marijuana. Let’s just stand by for more updates regarding this issue. Meanwhile, it is important to educate your self and others regarding marijuana and stay responsible for your actions.