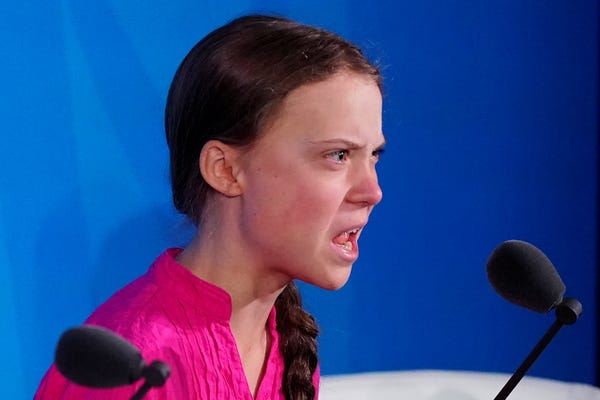 A documentary film released in January 24, 2020 is now circulating the internet tackling Greta Thunberg’s claim about the alleged climate situation of our planet. The film entitled “Greta Incorporated: The Exposé” is a 29 minute investigative documentary produced by Rebel News (Canada), featuring Keean Bexte as an investigative journalist, exposes how this whole climate movement spearheaded by Greta Thunberg, a 16-years-old girl, is really a questionable agenda that sends message of apocalyptic doom, fear, and panic to the public. However, before you proceed to read this article, it is important to know that the media that produced this documentary film (Rebel News) is a far-right media company. Even so, regardless of its political leanings, the public should still know these facts. As the saying goes – “truth is truth no matter who tells it”.

In the context of the film, the reporter went to Stockholm, Sweden in intent of asking Greta Thunberg questions: is Greta really on a school strike? Is her entourage a big corporate PR agency? What is the relationship between Greta and Ingmar Rentzhog? And when he started to approach Greta to ask questions, he was violently pushed, punched, and was never allowed to go near her. And when Greta’s bodyguards were also asked questions such as “who is paying them”, the body guards do not answer. Therefore, watching the film, you will also be puzzled why are the people critical of Greta not allowed to go near her to ask questions. What the documentary uncovered was that Greta Thundberg is not really on a strike at school as the school she is currently in is a “school for children with special needs”. The school, as what the film shows, doesn’t really have a regular attendance requirement like a regular school does.

In addition, there was a part of the film that also presents an interview of Greta’s father,Svante Thunberg, saying Greta’s mental health has gone better since she started campaigning; that it helps her cope with depression and other mental health issues. This tells that Greta is sincere in what she’s doing and that she’s really passionate about it. What people should hope is that when she knows that she’s just being used here, it will not extremely devastate her. Nonetheless, when this happens, perhaps it will be better if the public will forgive her because she is just an innocent child.

Meanwhile, in one video clip taken from the full UNICEF press conference that can be found circulating in Youtube (https://www.youtube.com/watch?v=0bwLt_5t73g), which has now reached more than 3 million views, it turned out that Greta Thunberg was not able to properly answer questions without a script. When asked by a journalist named Tomas Kvarnkullen, “What kind of message would you send by doing this to our leaders and do you think it’s about time that president Donald Trump would respond to what you have said today?” Greta then answered, “Uhm, I think, I’m sorry what was the first question?” The journalist then repeated the question. Then Greta just simply said, “I think the message we want to send is that, we’ve had enough, and ahh…” then she immediately tried to pass the question to others by saying, “Anyone else want to answer that question? I can’t speak on behalf of everyone”. However, none of the children answered the questions. Then the journalist again repeated the question, “What about Donald Trump, if he’s here today, do you think he would respond to this in any way?” Then Greta again just simply said, “I think maybe you should give some questions to the others as well.”

On the other hand, in a January 24, 2020 The Ben Shapiro Show, Shapiro commented, “I don’t know why adults listen to Greta Thunberg’s solution to global warming when it is patently insane. What she is trying to say is that we should really shutdown the entire economy of the world. Normally when somebody tells you to panic, that’s a bad idea. I’m not gonna panic over the possible increase in global temperature of at maximum 4 degree Celsius, according to the IPCC, over the course of the next century. In fact, what we should be attempting is mitigation and adaptation. This is not to say that we can’t take measures that would lower carbon emissions. In fact the US fracking for natural gas has lowered our carbon emissions dramatically. But her actual proposal, the one that’s being praised quote, “we demand at this year’s World Economic Forum, participants from all companies, banks, institutions and governments immediately halts all investments in fossil fuel exploration and extraction, immediately end all fossil fuel subsidies, and immediately and completely divest from fossil fuels”.

Referring to Greta’s demand, Shapiro continues, “Every government and institutions are supposed to stop using fossil fuels. We don’t want these things done by 2050, 2030, even 2021, we want this done now! This is just a very minimum amount of effort that is needed to start new rapid sustainable transition.”

Shapiro then said, “Since you’re talking about the end of the civilization as it currently exists, yeah, this seems a lot! That seems like a lot and it just not seemed justified by the available evidence. It is always easier to get people to rally around the problem than it is to get them to rally around the solution. When it comes to big problems, you should actually be providing real solutions not nonsense. Literally, no one is going to embrace this solution, Al Gore would not implement that. He would not. If you are a president of the United States, you would not. There’s no adult on this planet that sees this proposal as anything other than patently insane.”

Meanwhile, in an article by Sandipan Deb of Livemint.com, a very important point was stated as:

“I can bet that 90% of people who support Thunberg and the climate strikes never bothered to check what they really stand for. It’s easy. Go to globalclimatestrike.net and click on “What are you asking for?” Among the demands—immediately ban fossil fuels, etc.—is “climate justice”. Click on that and you’ll reach peoplesdemands.org, “people” being a coalition of hard-left activist groups. Their demands involve rejecting carbon capture and storage, carbon trading, geo-engineering, biofuels, and use of any technology or market mechanisms to cut carbon emissions. Only community-led climate solutions that recognize the traditional knowledge, practices and wisdom of indigenous peoples and local communities will be permitted. In sum, Thunberg represents a movement that wants us to revert to a pre-industrial world, with no room for innovation or progress.”

“Of course, we should act against climate change. But panic, which is what Thunberg wants us to do, is not a rational response. Even if global temperatures rise by 1.5 degrees above pre-industrial levels, nothing cataclysmic will happen. And, apocalyptic predictions are hardly new. In 1989, a United Nations Environment Programme director warned that “entire nations could be wiped [out] by rising sea levels if the global warming trend is not reversed by 2000″. In 2006, Al Gore said we had “10 years” to solve the problem. In 2007, the UN Intergovernmental Panel on Climate Change (IPCC) gave us till 2012. And Gore and IPCC even got the Nobel! IPCC has just released another doomsday scenario. Since bad news sells, it’s made headlines. No one bothers to check that IPCC is wrong all the time.”

There are more important concerns that need to be raised regarding this fear-mongering effort. Moreover, it is also very important for the public to know who the people behind this well-orchestrated apocalyptic climate movement are. So to watch the full length documentary produced by the far-right news media, follow this links: