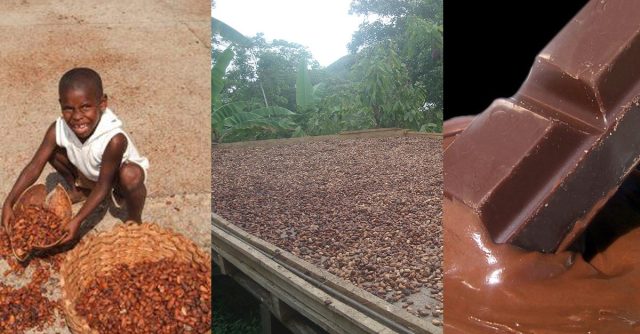 Much of the world’s cocoa supplies are from West Africa. This is where famous brands get their main ingredients for their very expensive chocolates such as Nestle, Mars, Ferrero, and Hershey. However, most of these branded chocolates were produced unethically as the farms where these cocoas come from uses children as laborer. As of this year, these companies still cannot guaranty the public if their product does not involve child labor or not. However, if remain unimpeded, these companies will most probably continue its business as usual for more years. These rich corporations pledged to stop using cocoa from farms that uses child labor yet for almost two decades they still cannot answer questions straight regarding this matter.

“If we determine a product which is produced with unethical practices, we would not touch it. We are doing our role to improve social practices with trainings… But is the system completely clean? I think no-one can say that at this moment.”

According to the report from United States Labor Department, there are more than 2 million children working in Africa for cocoa plantations. Most of them work 10 to 12 hours a day, swinging machetes or carrying heavy weights for kilometers while being exposed to dangerous pesticides. Many of these child workers live in very poor places with very horrible basic facilities. Instead of getting education, most of them end up in these plantations where these billion-dollar corporations buy their cocoa. Many of these children are either victims of human trafficking or forced by their parents because of extreme poverty.

When asked by the Washington Post to comment on this matter, Antonie Fountain, managing director of the Voice Network, a group focusing on child labor in the cocoa industry, said:

“The companies have always done just enough so that if there were any media attention, they could say, ‘Hey guys, this is what we’re doing. It’s always been too little, too late. It still is. We haven’t eradicated child labor because no one has been forced to. What has been the consequence . . . for not meeting the goals? How many fines did they face? How many prison sentences? None. There has been zero consequence.”

Most of these big corporations profit well from cocoa. For example, Ferrero, the company that produces famous products like Nutella and Ferrero Rocher, represents almost 9% of the global market for chocolates and earns billions of dollars a year ($10 billion in 2015 alone). However, just recently Ferrero is again being rocked by another controversy on its hazelnut products. Most of the world’s hazelnuts are from Turkey (about 70%) and most of these plantations use illegal migrant workers, including children as young as 11 years old, which are paid very low. This is according to the official government report. In addition, Turkish government also estimated in 2012 that there were 900,000 children working in different industries in Turkey with age ranging from 6 to 14 years old.

Just like the adult victims of this modern-day slavery, these children are highly exposed to dangers where in 2018 the Centre for Child Rights in Turkey reported that there were more or less 67 children or minors who died while working. Many of these children aged 10 to 12 perform very exhausting and risky works for a salary way less than the minimum wage of Turkey. Child labor is known to be illegal in most of the places where these 2 products come from but most of these regions have a lot of farms selling to big companies that’s why it’s very hard to combat. However, petitions are continually being made by different NGO’s and labor groups to end this problem. With everybody’s support, these groups believe that in the coming years, this problem will be eradicated.