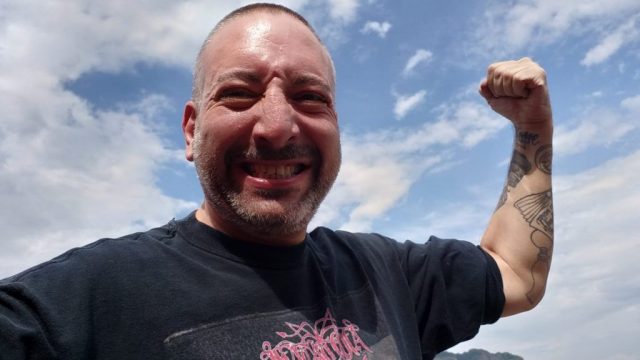 I want to share the story of Craig Lewis, an inspiring peer counsellor who is currently doing amazing projects inside and outside the punk rock scene these days, touring around, meeting amazing community workers/activists, talking and educating young people about mental health, addiction, abuse, and recovery. Last 2017, I volunteered to translate Craig’s book on mental health recovery entitled Better Days into Tagalog (Filipino) language and this book will be available soon for a very reasonable price. What’s more amazing is that Better Days has also been translated into many different languages and it is now circulating in many different places in Europe, America, and Asia. Craig’s story brings lessons of hope not only to the individuals who want to stand up, use his strengths, create changes, and make sense in a society but also to the entire world that recovery from psychiatric medication is possible! We don’t deny that psych meds are somehow helpful to some people for them to cope. However, we must always remember that these substances are addictive and can cause dangerous and even fatal side effects (ex. suicidal and homicidal ideations, depressions, obsessive thought patterns, organ and neural damage, etc.) and are not really appropriate for long term use.

“I know that I’m a living, breathing example of surviving the impossible. So if that’s the case and you know it’s true, why don’t have fun?”

To give you a little idea of Craig’s murky past, he has been misdiagnosed by his family psychiatrist during his teenage years and with the consent of his parents, he was labelled mentally ill and prescribed many different psychotropic drugs for his “made-up” mental illness and this has caused serious harms in his life. Craig has been taking these psychiatric drugs for 30 years but now he has survived and uses his experience and earned skills to inspire people and save them from going the same direction that he temporarily got into. Drawing inspirations from the multi-faceted and vibrant punk communities around the world and from life-saving philosophies of Viktor Frankl, Craig Lewis is now committed to look back at his suffering and create meanings out of it by giving talks, trainings, and seminars to people who are interested to learn and share experiences about mental health or even to those who like to help others recover. Journaling and sharing his own experiences on recovery from emotional and psychological abuse and even substance addiction, he is now a dedicated mental health advocate who shares alternative perspectives and non-chemical/non-drug based ideas for therapy.

The lack of real parental love

The story begins when he was 14 years old; through his parent’s ignorance and will, he was institutionalized and ordered to take different kinds of medication for his so-called mental problem (which is made-up). Most of these drugs are very strong and therefore very damaging and disempowering to the individual, physically and mentally. This went on for 3 decades but thanks to Craig’s resilience and supporting friends, he finally made it and now it has been 4 years since he stopped taking medications. Craig discovered his record from the institution and this confirmed his suspicion that there was really something wrong going on with him being under the “care” of that facility. He found proof for the abuse and other maltreatments that he received during those years through the writings and the records of these “health care” providers themselves. As he recounted, he was first confined into this facility for 15 months and then was sent back home, labelled as “cured”. However, after 3 months, he was sent back to the same mental hospital again and then later put into another residential facility. Sadly, it was late when Craig learned that he really don’t have mental illness. The diagnosis was removed but now he had complex trauma and still coping to become his own real and healthy version as a person from decades of being “numbed out from the feelings or the sensation of the real world” through over-medication.

In a recent podcast by Petra Velzeboer entitled Escape from Psychiatric Care (uploaded October 14, 2019), Craig Lewis was interviewed and Craig gave beautiful and inspiring words to the audiences. He spoke about his current struggles, coping, and processes in recovering from the long term effects of complex trauma and abuse and also the physical effects of psychiatric medication and how it affects his social life. He also talked about the important role of speaking in healing and how to stay alive through the drive of your passion and sense of commitment to help others in your own simple yet effective way. Without letting the suffering and the society drag you down to despair, Craig discussed, you can always create hopes not only for you but also for others. In this very heart-warming edition, Craig Lewis also talked about his understanding of his parent’s history and Jewish background, especially the presence of abuse that, according to him, made them unloving people who unconsciously projects their own trauma to him as their son; sending him to the psychiatric institutions for no valid reason. But despite all of this, Craig says that he forgive them. He is now unstoppable in sharing his gift to humanity.

“I was thought by some people who learned before I did what it meant to survive the impossible, to survive the most brutal adversities… without those people showing me the way so I could break out, I wouldn’t be here today. So I have the responsibility to honour all those who had influenced me…”

To hear more about this very inspiring podcast (which I really suggest if you want to know Craig more) and also other interviews by Petra Velzeboer, go to this link: