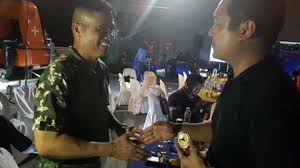 BRP DAVAO DEL SUR (Off Casiguran, Aurora) – The country’s assertion of sovereignty over resource-rich Philippine Rise has been a success after a civilian recreational vehicle first reached the buoy placed by the Philippine government to mark the shallow portion of the country's north easternmost area.

"The purpose was assertion and that was achieved in my opinion. We reached the area using a civilian vehicle to touch the buoy," Pwersa ng Bayaning Atleta (PBA)
Party-list Rep. Koko Nograles told mediamen on May 16.

Nograles was among those who rode a jet ski, from the BRP Davao del Sur (LD 602) towards BRP Tarlac (LD 601) on the first day of the commemoration activity (May 15), and to the orange buoy painted with a Philippine flag on the second day (May 16) in a shallow portion of Philippine Rise, 180 kilometers off Casiguran, Aurora province.

"We expected that critics will find fault but clearly, the point is for the country to assert itself and that is what we proudly accomplished," Nograles said.

Some critics said Duterte should fulfill a statement he made during the 2016 presidential polls campaign that he would ride a jet ski to the West Philippine Sea to assert the country's sovereignty over the disputed islands.

Armed Forces of the Philippines Northern Luzon Command (AFP-Nolcom) Lt. Gen. Emmanuel Salamat presented a commemorative medal to Nograles on board BRP Davao del Norte, the lead ship for nine military and research vessels that proceeded to the area for an expedition to mark the first year anniversary of the renaming of the area, originally known as Benham Rise.

In 2012, the United Nations granted the Philippines’ claim to Philippine Rise as an extension of the country’s continental shelf. The undersea plateau and biodiversity hotspot located off eastern Luzon is within the Philippines’ exclusive economic zone. (With Priam Nepomuceno/PNA)