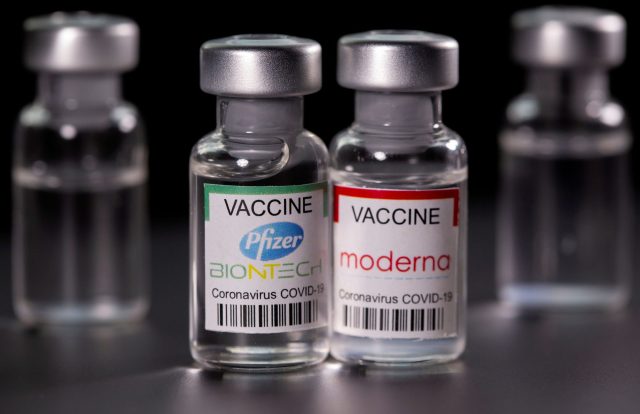 The FDA granted emergency use authorizations (EUA) for the new COVID mRNA booster vaccines from Pfizer and Moderna on Wednesday, August 31. The advisory group for the CDC (Centers for Disease Control and Prevention) and the CDC director gave their approval for the new vaccines to be distributed right away on September 1st. This week marks the beginning of their administration in the US. Interestingly, the federal government ordered 105 million doses from Pfizer and 66 million doses from Moderna more than a month before either body had approved the completely new formulation.

After its advisory group convened on June 24, 2022, the FDA (food and drug administration) only formally decided on the vaccine’s desired composition. The vaccines combine the novel omicron BA.4/5 mRNA that codes for the omicron spike protein with the old, original Wuhan strain vaccine mRNA, also known as the “ancestral vaccine”. The combined mRNA doses for the booster shots from Pfizer and Moderna are the same as before: 30 mcg for Pfizer and 50 mcg for Moderna.

The dose is not listed on the new vials or their cartons, suggesting that the choice of how much to use was decided just lately. Before their meeting on September 1, not even the members of the CDC advisory committee were aware of the dosage for the new bivalent vaccines. Because there were no human studies, neither the producers nor the FDA were required to conduct lengthy tests that would have taken months to complete. Take that in mice, not humans, have been used in the testing of the new BA.4/5 bivalent vaccinations.

On September 1, the same day the CDC approved the program’s launch, health organizations in Canada, Switzerland, and the FDA launched new, bivalent booster shot programs. On August 15 and September 3, almost simultaneously, the UK approved two distinct bivalent boosters. The new bivalent boosters will be introduced in the UK with the widest distribution ever. Additionally, it has given doctors who complete the program’s vaccination of every nursing home resident by October 23 with sizable bonuses. While the US uses the mRNA coding for the later omicron variant BA.4/5 spike, these other nations use an earlier omicron mRNA as the template for their omicron-ancestral bivalent vaccinations.

It appears that you won’t be receiving the right information from the major media that you require to understand the boosters. The Defender, therefore, studied the analysis of boosters published in the New England Journal of Medicine (NEJM) on August 31 and assessed a study of omicron boosters tested in non-human primates by Dr. Fauci’s Vaccine Research Center. The Defender also attended the all-day CDC advisory committee meeting on September 1 and reviewed FDA documents.

It is easy to predict why FDA did not call its advisory committee before granting the authorization. Its advisors decided last year not to approve the ancestor boosts because the information they had suggested the previous vaccines “were still effective”. Two top FDA officials who opposed the introduction of the 2021 boosters resigned, giving the impression that the FDA had been forced to make the decision to distribute boosters.

As they are requested to approve vaccine programs for ever-younger ages, members of the FDA’s VRBPAC (Vaccine and Related Biological Products Advisory Committee) have been griping about receiving less and less information this year. Dr. Paul Offit, a member of VRBPAC and the creator of a Rotavirus vaccine at the University of Pennsylvania, claimed last month that “the fix was in”, implying that the committee’s discussions were a sham because the White House made the announcement that it would buy the vaccine immediately following the meeting.

Last week, Dr. Offit was quoted as suggesting that the mouse findings weren’t enough to introduce the new boosters. As a result, FDA decided against providing him and the other members with a public forum where they could complain about FDA’s laxness—what some may refer to as irresponsibility, insubordination, or even blatant wrong-doing. After all, the FDA’s mission statement states that it “is responsible for protecting the public health by ensuring the safety, efficacy, and security of human and veterinary pharmaceuticals, biological products, and medical devices,” not by approving vaccinations that haven’t been thoroughly evaluated.

Since almost everyone has already experienced COVID, earlier vaccine benefits were exaggerated, the disease has become milder, the vaccines do not prevent infection or transmission, and COVID-related fear is largely over, the CDC knew it would be difficult to persuade the public to receive these shots. As a result, CDC had to use new approaches.

One tactic was to use the “bandwagon effect,” in which you try to persuade the public that since everyone else is getting the treatment, they should follow suit. A poll that stated 72% of those who were eligible planned to receive the new boosters was presented at the Advisory Committee on Immunization Practices (ACIP) convention. Only 33% of people have had their first booster, and 67% have declined the offer. Demand for COVID vaccinations is also drastically declining. A COVID vaccine has only been administered to less than 5% of preschoolers in the three months since it has been approved.

However, according to the CDC’s own numbers published in the New York Times, the actual amount is 33%, not the 49% it suggested to the ACIP. According to the CDC, 67% of the population is considered to be “completely vaccinated”, which is how they arrived at their calculation that makes the boosters appear to be more popular than they actually are. To promote the earlier COVID vaccines, the federal government committed $1 billion to purchase advertising, ensure favorable news coverage, and stifle “negative” news.

The ACIP members were informed that of the 224 million Americans who are reported “completely immunized,” 210 million are already qualified for the new boosters. The government has so far purchased 171 million bivalent booster doses, which are suitable for anyone 12 and older (105 million from Pfizer and 66 million from Moderna). Children under the age of twelve have historically gotten smaller doses of the COVID vaccination than adults, and the FDA and CDC have not yet approved the introduction of new bivalent boosters for them. However, the authorities asserted that they will do so soon.