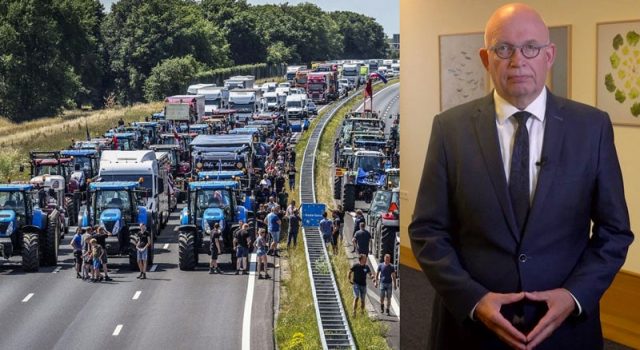 Henk Staghouwer, the Netherlands’ minister of agriculture, was forced to retire as a result of fierce opposition from Dutch farmers to his radical climate agenda, which aims to wipe out their means of subsistence. Staghouwer was leading the Dutch agriculture ministry’s climate policy that involved confiscating farms in a forced government buy-out scheme. In the wake of the huge protests from farmers, Staghouwer has now been forced to step down.

He informed the Dutch cabinet that he would not be able to implement the government’s extreme green agenda before the September deadline due to resistance from farmers. The climate agenda calls for reducing nitrogen emissions from the country’s agriculture industry to the point where farms could no longer operate. The program includes a $24.2 billion plan to buy out local farmers and speed up the move away from intensive farming methods.

The effort sparked widespread protests by farmers across the continent, and the farming industry experienced a significant upheaval as a result of the aims for carbon reduction. Over 40,000 farmers protested the program in the streets in July, blocking roads with tractors and vandalizing the residences of government leaders. Other sympathizers across Europe protested in support of the Dutch farmers, claiming that such a strategy is ineffective in the face of severe food shortages and extremely high inflation rates.

The Dutch government required a 50% reduction in nitrogen emissions by 2030 and gave local governments the responsibility of determining the most effective means of achieving that target. 40% of the nation’s emissions come from the livestock agricultural industry. Up to one-third of cattle farmers may lose their businesses as a result of the legislation. The Netherlands is the second-largest exporter of agricultural goods in the world and the top exporter of meat in the EU.

Farmers said Staghower had “little concrete vision in him” and “faced an impossible task,” according to Bart Kemp, the foreman of the farmers’ interest group Agractie Nederland. Staghouwer’s predecessor, Carola Schouten, temporarily assumed his position while a replacement is determined from Staghouwer’s party. A positive relationship with the farmers has never been valued by Schoouten.

Prior to the government’s budget formation earlier on Monday, Staghouwer claimed he needed more time to prepare suggestions for a sustainable farm industry. He continued, saying he intended to wait until current discussions between his office and representatives of the business had reached a resolution. The parliament criticized Staghouwer for not coming up with a clear plan to assist the industry in making the shift to agricultural methods that produce fewer nitrogen emissions. Plans to reform the farming sector were also blocked by departmental officials.

The EU permits the Netherlands, along with Denmark, Ireland, and the Belgian province of Flanders, to exceed the maximum amounts of manure that can be applied to fields. This is partially caused by the nation’s relatively tiny landmass. Due to the Netherlands’ failure to fulfill EU water quality criteria, Brussels seeks to phase away this exception.