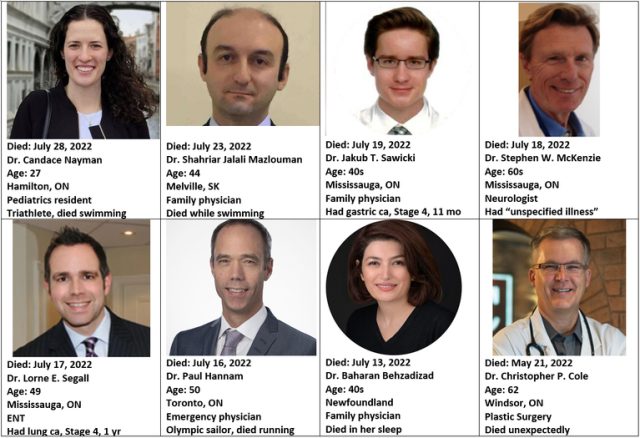 In a letter to the Canadian Medical Association (CMA), Dr. William Makis, a doctor from Alberta demanded that all vaccination requirements in the public health sector must be stopped and that there should be a sincere public inquiry into the deaths of young Canadian doctors who died “suddenly and unexpectedly”. In his letter addressed to Dr. Alika Lafontaine and Dr. Katharine Smart, Dr. Makis claimed that these CMA presidents had aggressively and unethically promoted the use of experimental COVID-19 vaccines to the Canadian public.

“I have now tracked 32 Canadian doctor sudden deaths (thank you to all who contributed). These doctors were actively practicing medicine & were healthy prior to taking illegally mandated COVID-19 Vaccines (2, 3 or 4 doses). I’ve sent a letter to Canadian Medical Association (CMA) Presidents Dr.Alika Lafontaine & Dr.Katharine Smart, both of whom supported COVID-19 Vaccine mandates on all of Canada’s 92,000 doctors and I urged them to call for IMMEDIATE termination of all COVID-19 Vaccine mandates in Canada’s healthcare, as well as Investigations & Public Inquiries into these sudden deaths. CMA cannot continue to ignore this catastrophe.”

Instead of forcing Canadian healthcare workers and ordinary citizens to take the vaccines, which has way too many documented serious risks and unproven benefits, Dr. Makis suggested that both doctors, Smart and Lafontaine, must use their position as CMA presidents to publicly demand that all vaccine requirements in Canada’s healthcare system must be immediately repealed. He also suggested that they should call for urgent investigations and public inquiries into the cause of the deaths of those young Canadian doctors who suddenly died after the second, third, or fourth dose of COVID-19 jabs.

Young and healthy Canadian doctors died shortly during the preceding 16 months, all of whom had received two, three, or four doses of the COVID-19 vaccine. Five young doctors from the Toronto region died within two weeks of one another, making national headlines. Meanwhile, in an older post, Dr. Makis stated:

“I’ve now tracked 13 Canadian doctors “sudden deaths” (thank you to everyone who contributed info). This is the most complete data set I’ve seen anywhere by far. Three doctors died while exercising (two swimming, one running), two of them were very high level athletes. Three doctors died “in their sleep” unexpectedly. Two doctors also had aggressive cancer that had arisen within the past year. All of them were at least triple vaccinated due to illegal vaccine mandates. Remember: these are YOUNG healthy individuals who are always first in line to get jabbed. Vast majority of doctors will get their 4th and 5th jabs this summer and fall. Sadly, I expect many more deaths to come.”

In the said letter to CMA, Dr. Makis said that each of the deaths is “highly suspicious for COVID19 vaccine injury” because the doctors who died are “previously healthy”. He added that “some doctors died suddenly while still being active, even doing the regular physical activity while some died in their sleep”. Some doctors died from unusual accidents, heart attacks, cardiac arrests and strokes, or their cancer developed suddenly and aggressively. He also stated that Pfizer and Moderna may not be sued for their “experimental” mRNA vaccines but the doctors of CMA, Lafontaine and Smart, can be held legally accountable for “publicly promoting their forceful use on Canada’s doctors”.  Lastly, he then strongly stated on the same letter:

“You cannot stay silent while illegally mandated COVID-19 vaccines may be killing dozens of young Canadian doctors and putting thousands of doctors at high risks of severe injury and death. I am urging you to remember your ethics and oaths, and use your platform as presidents of CMA to publicly call for immediate termination of all COVID-19 vaccines mandates in Canada’s healthcare, and call for urgent investigation and public inquiries into what is killing fully COVID-19 vaccinated young Canadian doctors. Thank you!”