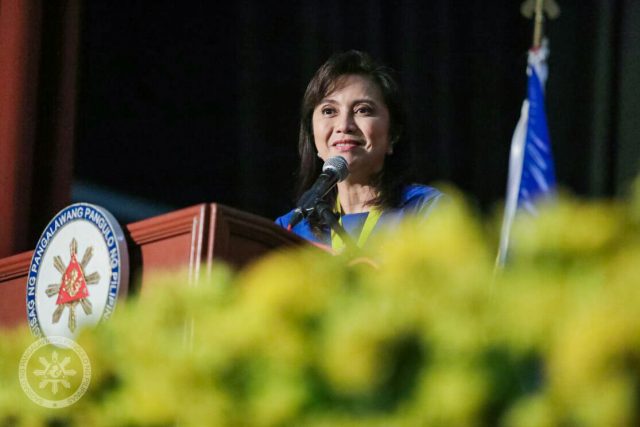 Aspiring President Vice President Leni Robredo criticized the government for its lack of initiative in holding those behind the fake news accountable.

The vice president said he had made many complaints through a government agency that she refused to disclose but “walang aksyon na ginawa [no action has been taken].”

“Meron na kaming nireklamo before. Hindi ko na sasabihin kung saang ahensya kami nagreklamo, hanggang ngayon wala pa. Wala pang aksyon [We have complained before. I won’t say which agency we complained to, so far none have. No action has been taken yet],” said Robredo.

“Kung hindi ito aaksyunan talagang walang mangyayari. Ito na yung ang magpapatakbo ng– ang magpapatakbo ng– parang society natin, kasinungalingan. Kasi yung nagsisinungaling nga hindi naman napu-put to– parang hindi naho–hold into account, hindi napaparusahan [If we don’t take action, nothing will happen. This is the one who will run– the one who will run– like our society, lies. Because those who lie are not put to they don’t seem to be held into account, they are not punished],” Robredo added.

The aspiring president even said that all they can do is report and correct fake news.

“Kami ginagawa namin yung kailangan gawin, yung nag-rereport kami, wala talaga eh. Walang aksyon, Ka Ely. Walang aksyon [We are doing what needs to be done, what we are reporting, there is really nothing. No action, Ka Ely. No action]” said the presidential aspirant.

“Marami na kaming– marami nang pagkakataon na nagreklamo tayo. Nakikita natin, Ka Ely, yung effect ng pag pinabayaan yung fake news talagang yung mindset ng mga tao, yung mga paniniwala ng mga tao napapaglaruan and nakikita natin yun ngayon [We have had many – many times we have complained. We see, Ka Ely, the effect of ignoring fake news is really the mindset of the people, the beliefs of the people are being played with and we see that now],” she added.

The opposition leader added that she did not see any initiative from the government to do their part in stopping the spread of fake news, which, she said, was “wala sa kanilang kontrol [out of their control].”

“Parang wala naman. At least wala akong nakikitang ganoong initiative, [It seems like nothing. And at least I don’t see such an initiative,]” she said.

Robredo cited the fake news that spread on martial law enforcement and lockdown amid the proliferation of new cases of coronavirus disease (COVID-19), which “only creates panic among the public,” prompting them to the storage of products and medicines.

She said misinformation like this would grow because ““hindi napapanagot ang mga tagapaghatid ng pekeng balita [fake news reporters are not held accountable].”