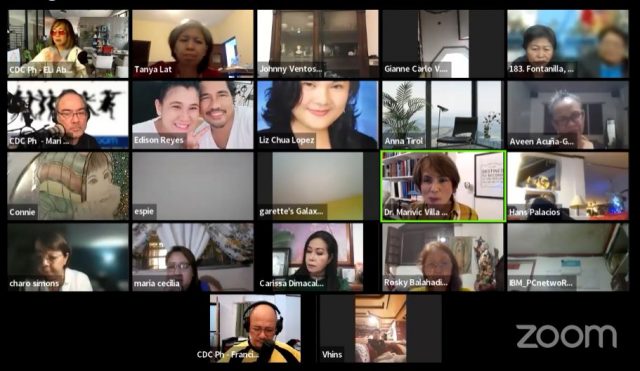 A few weeks ago, several Filipino professionals, lawyers and healthcare workers, have again gathered online for a forum, organized by Concerned Doctors and Citizens of the Philippines (CDCPh), to discuss the coercive vaccination program currently being perpetrated by the Philippine government to its own citizens. This is particularly on the indirect coercion being done to Filipino workers especially when the IATF-EID (Inter-Agency Task Force for the Management of Emerging Infectious Diseases) released its supposed-to-be illegal and unconstitutional mandate entitled Resolution 148-B, which took effect last December 1, 2021.

On the said resolution, employers are obliged to require their onsite employees to be fully vaccinated against the alleged viral disease COVID19 and if an employee refuses to get the jab, they need to undergo regular RT-PCR test using their own salary because if not, based on the IATF-EID resolution, their employer may not allow them to continue working onsite.

Because of this unfair mandate from IATF-EID, many Filipinos workers complained and some even sued Department of Health (DOH) Sec. Francisco Duque III, Health Undersecretary Charade Mercado-Grande, IATF-EID co-chairperson Karlo Nograles, and even the Supreme Court represented by deputy clerk of court and chief administrative officer Atty. Maria Carina Cunanan and presiding Judge Pia Cristina Bersamin-Embuscado of the Las Piñas RTC Branch 198. According to a report from The Manila Times:

“In a 70-page petition for declaratory relief (with urgent application for the issuance of a temporary restraining order and/or writ of preliminary injunction), Kathryn Joy Hautea-Nuñez, clerk of court of the Regional Trial Court (RTC) Branch 198 in Las Piñas City, asked the Manila Regional Trial Court to declare as void IATF’s recent resolution on mandatory vaccination.”

Meanwhile, in General Santos City (Mindanao), five residents filed a complaint against the IATF-EID in relation to Resolution 148-B. On their complaint filed, the complainants wrote:

“The person should have legal capacity to give consent; should be situated as to be able to exercise free power of choice, without the intervention on any element of force, fraud, deceit, duress, overreaching or other ulterior form of constraint or coercion…”

Aside from the fact that requiring vaccination card for any government transaction is illegal as it equals to mandatory vaccination, there are also many valid scientific and legal bases for any person to decline vaccination. For example, according to Dr. Marivic Villa, one of the health professionals who attended at the CDCPh online forum:

“You guys have to look at the latest data out of Hong Kong in which there is a very high risk of cardiomyopathy and myocarditis among young male children. That’s 1 is to 2,700, so that’s very high! And it’s not even supposed to happen in this so-called “vaccine”. But this is one of the many proofs that they are seeing something (data)…”

“It’s not only heart attack that we are looking here, it’s exactly the same mechanism for the stroke. They are focusing on the heart attack because these people (saying) are cardiologists. But when you look at it, strokes can also be included because it is exactly the same mechanism. So I would not wonder why if heart attack and stroke will go hand in hand in the next five years from those people who got vaccinated, especially with the mRNA (vaccines). It’s quite bad news but that’s the truth. I’m speaking here as a doctor.”

Dr. Villa was not the only doctor who raised this very disturbing data about vaccine deaths and injuries. Dr. Benigno “Iggy” Agbayani, the former president of CDCPh, also commented:

”Death is already a proven outcome of these vaccines. There are studies in Europe, particularly in Norway, that there were so many people died in the nursing homes and they proved that about 25% of those who died were definitely because of the vaccines. Now, the numbers based on world reporting are so high. Did you know that there are 2.4 million adverse events reported worldwide? That’s only for VG (?) access and I think it has only 20% so it is underreported. And there have been 13,000 plus deaths worldwide and that is underreported again. And I think the prediction is already more than 13,000, meaning the actual number. So, there is no question that this vaccine can cause death and it causes adverse reactions. So it is really an option (vaccine refusal)…”

Meanwhile, another participant of the forum named Atty. Emmanuel Fontanilla, a lawyer from General Santos City, also talked about how the IATF-EID, along with the president and other local government officials, are conspiring to commit a crime of indirect coercion and human rights violation to the Filipino workers through Resolution 148-B. According to the lawyer:

“This really hurts us because the president and others who are on the top positions (of the government) are presenting it to the public as if it is not mandatory, yet the underground instruction is to force the people in any way possible. “You need to fool the people, you need to scare them because Fillipinos are coward, they will not fight back, they will just obey.” That’s how I see in our government’s policy…

Of course they cannot declare it but you can see it in their actions. Why are they not stopping the actions of the lower echelons who are indirectly forcing the people? These are illegal things which are indirectly being done.”

One of the obvious reasons for many is that several officials in the Philippine government, including of course in the health department down to the barangay level, have been bribed and bought by big pharmaceutical companies and other institutions involved in this on-going global medical genocide and scam. As explained by Dr. Villa on the forum:

Meanwhile, during his last turn on the forum, Dr. Iggy Agbayani stated:

“You cannot coerce or mandate a vaccine that has death as an outcome. How can you force me to do that? I cannot be forced. You can tell me that there is a risk, and it’s still my decision because I could die. And then remember that if I do die, they have a clause that says they cannot be sued. And that is so unethical; it’s unethical when I can’t sue them if I die.”