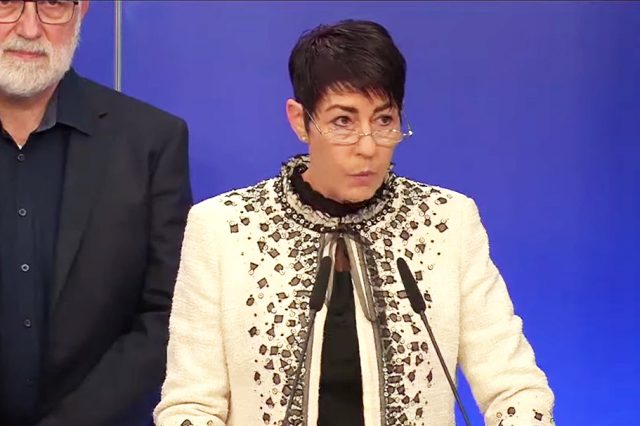 Just a few days ago, the German Politician who is a Member of the European Parliament (MEP) Christine Anderson answered Australia’s SOS, expressing her full support with Australia on its struggle for human rights and freedom against the seemingly totalitarian regime currently reigning under the guise of “health and safety of the citizens”. The Australian government, according to Anderson, is “trampling on human rights, civil liberties, and the rule of law” in dealing with its citizens’ lawful and valid refusal for vaccination against COVID or the so-called SARS-CoV2 in which no government can ever prove its existence.

“I will do whatever I can to make it known to the world that you’re once free and liberal democracy has been transformed into a totalitarian regime which tramples on human’s rights, civil liberties, and the rule of law. I’m imploring all of you around the world who still think your governments are looking out for your best interest…”

She then reminded the viewers of the usual appeal of the authoritarian psychopaths in the higher leadership positions and politics by saying:

“At no point in history have the people forcing others into compliance been the good guys. The welfare of humanity has always been the alibi of tyrants.”

In late October of this year, Anderson also gave a speech in a meeting along with other MEPs. The video of the speech was posted on her Twitter account where she stated that she “will not be vaccinated with anything that has not been properly vetted and tested”. She also added that the COVID vaccine has “no sound scientific evidence that the benefits outweigh the disease itself and possible long-term side effects”. She then continued explicitly:

“I will not be reduced to a mere guinea pig by getting vaccinated with an experimental drug. And I will most assuredly not get vaccinated because my government tells me to, and promises in return I will be granted freedom.”

Meanwhile, talking about the history of the richest people and their puppets in the biggest government positions, she then asked a question:

“In the entire history of mankind there has never been a political elite sincerely concerned about the wellbeing of regular people. What makes any of us think that it is different now?”

On her latest speech video, she also questioned her listeners about their stance with regard to the future of the children and how it connects back to the history of the Nazi reign in Germany. Christine Anderson said:

Last month, it was reported by the Sydney Morning Herald that there are more than 10,000 Australians filing COVID vaccine injury claims out of 78,880 adverse events recorded by the Therapeutic Goods Administration. According to the article:

“Services Australia is building an online portal, to be launched next month, for uncapped claims above $5000 from those who suffered injury and loss of income due to their COVID-19 vaccine, with compensation for medical costs and lost wages to be paid by the government.”

To listen to Christine Anderson’s full speech, go to this link: