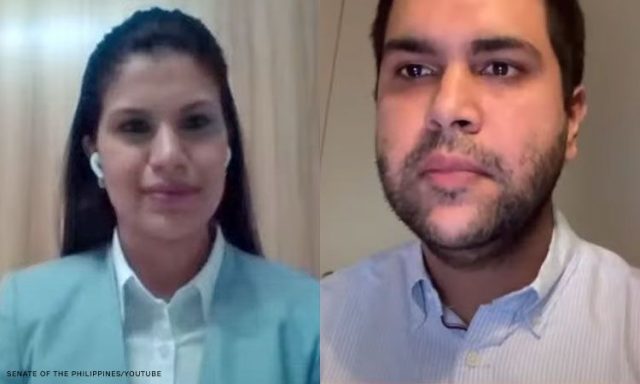 While attempting to leave the country, the two executives of Pharmally Pharmaceutical Corporation were arrested last Sunday, November 14, by the senate security at the Davao International Airport (Davao City), the hometown of President Rodrigo Duterte. The siblings Mohit, Parmally’s corporate secretary who handles the company’s financial statement, and Twinkle Dargani, the president of the company, were on board in a private plane departing to Kuala Lumpur, Malaysia when arrested.

The two were issued a subpoena by the Senate related to the investigation of the Duterte government’s pandemic deals that secured a contract close to P8.7 billion to Pharmally, despite many questionable issues surrounding the company and despite being the least qualified. The Dargani siblings refused to submit documents, therefore, failed to cooperate that’s why the senate investigation committee ordered their arrest on October 19. They are now under the Senate’s custody in Pasay City while the Senate investigation is still ongoing.

Pharmally became controversial when the Senate Blue Ribbon committee unearthed its multi-billion peso worth of COVID-19 supplies contract with the Duterte administration, despite having a small capital of only P625,000. Worst, further inquiry into the scandal even led to the unveiling of the faces behind the county-wide scamdemic profiteering which only pushes the ordinary Filipinos closer to the edge of the cliff. While the staff of Pharmally Pharmaceutical Corporations enjoys the fruit from the most disgusting and vile tree, which also comes with medical martial law, most Filipinos suffer not only loss of loved ones from faulty and baseless hospital protocols and vaccination but also from the loss of economic security.

According to the investigation, Pharmally got the contract from Duterte’s government through the president’s “close friend and former economic adviser” Michael Yang. It was known that Michael Yang connected the top officials of Pharmally to Malacañang back in March of 2017. In 2019, though, Michael Yang was linked to the illegal drug trade in the country by Eduardo Acierto, the former deputy director for administration of the Philippine National Police (PNP) Drug Enforcement Group, which is now already disbanded, through his reports in 2017. His report, however, was ignored and according to him, the narrative is being flipped by Duterte’s camp, accusing him of many things instead. Acierto also added that he received death threats from the president’s camp but he is still willing to face his opponents. In October 2018, interestingly, President Duterte cleared Michael Yang of the alleged involvement in the illegal drug trade.

In August of this year, the Commission on Audit (COA) flags DOH’s “inefficient use of over P67 billion” funds for in COVID-19, “including P42.4 billion deployed without proper documents; and P11.9 billion unused funds or the purchase of medical equipment and supplies, and hiring of additional health workers”. And during September, the Senate Blue Ribbon investigative committee chairperson Senator Richard Gordon strongly criticized Duterte for being “protective” of the Pharmally personnel. As a response, the president threatened to stop all the government’s transactions with the Red Cross, in which Gordon is also the chairperson.

As the Senate’s investigation continues, more stories are coming out and the murmurs of possible involvement of the president in this Pharmally scandal is, apparently, getting more and more compelling. It could be a coincidence but the timing when the president positioned “his people” in different offices before he declared a state of public health emergency and signed a P275-billion COVID-19 stimulus package in March 2020 is more than interesting.