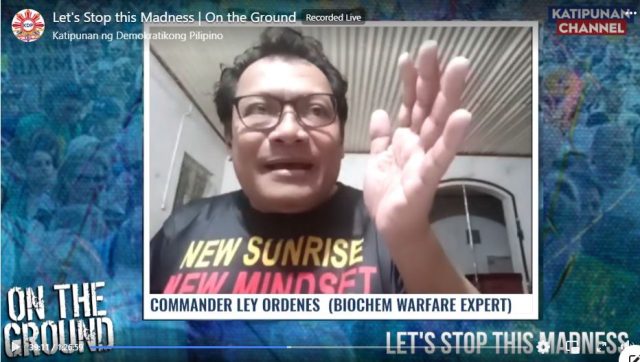 A Filipino biowarfare weapon expert named Commander Ley Ordenes has gone public, claiming that there are “5 Filipino generals who died”. However, what is not made clear by Ordenes is from what cause/causes those generals died. In addition to this, Commander Ordenes also claims that the five officials currently running the IATF (inter-agency task force for the management of emerging infectious diseases) have “a very different agenda” and that they don’t welcome other suggestions, even though from “an experienced expert” like him.

According to his own testimony, Commander Ordenes has been sent to a mission by the government for ebola during the late 90s. Because of his professional background, he’s considered by his peers as an “expert” that should be part of the agency (IATF). Commander Ordenes’ voice is supposed to be important in mitigation strategies against COVID yet instead, he was excluded and even censored from the president. The dismissive response he received from the generals of IATF made him realized that this particular agency is not willing to consider “outsiders” recommendations, no matter where they come from, even if they’re from a certified expert.

As an official representative, Ordenes was sent by the government through Philippine Navy and the US Navy. He studied in Maryland for biological warfare and pandemic mitigation around 1997 to 1998. At the beginning of 2020, Ordenes claimed that he talked to the “upper class” military of the country about his ideas with regards to the alleged pandemic. From the Secretary of National Defense to other important officials involved in the national COVID mitigation effort, Ordenes has been giving recommendations based on his expertise. However, Ordenes claimed all his efforts had no impact and was not valued, while sarcastically stating:

“Basically this group we often see in the television every night, this is the “official pandemic group of the Philippines”. And they won’t allow others to contribute or get involved.”

Commander Ordenes also explained how his words are being cherry-picked after speaking with the IATF officials for hours. “They don’t want to hear the truth”, he uttered, adding that the officials just select the words they want the president to hear. “They censor it, especially if it is against their official narrative…”

Meanwhile, Capt. Rey Valeros Jr., another Philippine Navy reserve personnel and the main host for the show “On The Ground” by the Katipunan ng Demokratikong Pilipino channel, also claimed that “there are already several reported cases of injuries from the vaccines in the armed forces personnel”, and that the police and the military “are now divided because some members do not want to take the vaccines”. Capt. Valeros then continued to explain:

“All we’re asking is for the government to take a pause and look at it from a broader perspective. Let’s have a meeting, let’s call the CDCPh (concerned doctors and citizens of the Philippines) and other independent scientists, doctors, lawyers, biologists, molecular biologists, etc. We are not against the government, we’re not saying that they’re not doing anything, we just want to correct what is wrong right now… “

“The armed forces and the PNP have realization already because every week, there are soldiers and officials dying, they just don’t tell it on the news. Just like last week, 5 generals have died, from the army and the air force but they just won’t tell it to the public. Therefore, many personnel are dying. You can tell it because you see their classmates sending condolences (in social media) or see posts from their wives, their children… It’s the same with the police. They have medical services but we’re not allowed to enter there…”

Ordenes also mentioned that many police are now confined because they tested “positive” for COVID but this won’t go public because it will have negative implications to the government. He then added:

“The military and the PNP, as much as possible they will not divulge everything that will compromise the integrity and the security of the armed forces…”

Speaking about other officials’ actions during the lockdown, Ordenes mentioned that some politicians immediately go to their favorite resort. While many Filipinos cannot normally go to their work, these politicians, according to Ordenes, are having a great time. Meanwhile, for his last words, Commander Ordenes calls to the public: