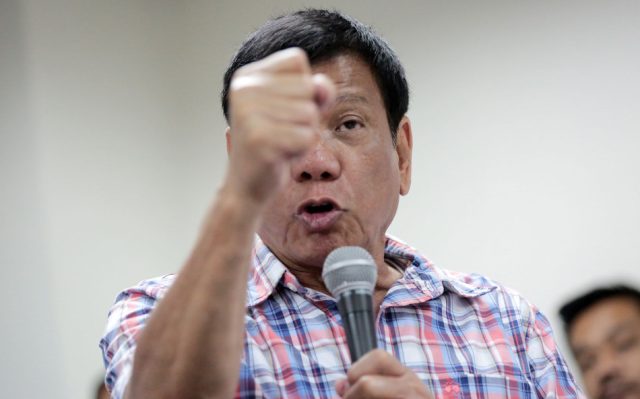 Despite reports around the world, including Philippines, regarding vaccine injuries and deaths and people who have allegedly still caught the coronavirus despite of them being fully vaccinated, the Philippine president Rodrigo Duterte has just announced yesterday that he will order arrest for those who don’t want to get vaccinated, claiming that those people are “potential carriers” of the virus. This alleged deadly virus, however, has never been proven until now. Duterte also asked the Filipinos who don’t want to get the jab to “get out of the country”. According to him:

“I’m just exasperated by Filipinos not heeding the government. We don’t have any intention except what is best for our nation…

If you don’t want to get vaccinated, leave the Philippines! Go to India if you want, or somewhere to America. But for as long as you are here and you are a human being and can carry the virus, you should get vaccinated.”

It was reported yesterday by the Inter-Agency Task Force for the Management of Emerging Infectious Diseases (IATF) that the Philippine government have already administered over seven million doses in which 1.9 million people had received two doses. Though, the government expects to have a higher number of vaccinated people. Some people also say it was out of disappointment why president Duterte said these inappropriate words or that it was a “grave call for people to take vaccination seriously”. According to Justice Secretary Menardo Guevarra:

“I believe that the President merely used strong words to drive home the need for us to get vaccinated and reach herd immunity as soon as possible. As a lawyer he knows that not getting vaccinated is a legal choice. There is no law as yet that compels vaccination against COVID-19, much less criminalizes it (not getting vaccinated), as presently available vaccines are still in their trial phases.”

However, if you try to watch his speech yesterday, the president’s tone sounds different from what Guevarra was saying. According to Duterte:

“They are hard-headed.  Don’t get me wrong. There is a crisis being faced in this country. There is a national emergency. If you don’t want to get vaccinated, I will have you arrested. And I will inject the vaccine in your butt. You are pests. We are already suffering and you’re adding to the burden…”

Threatening to force the people to get the vaccine, he also said:

“So all you Filipinos listening, watch out. Don’t force my hand into it…  I have a strong arm for that. Nobody likes it. But if you won’t get vaccinated, leave the Philippines. Go to India or somewhere — to America.  But as long as you are here and you are a human being that can carry the virus, get yourself vaccinated.”

Forcing a person to accept medical intervention or treatment is illegal under the law; it violates our rights to bodily autonomy and our freedom with regards to health. However, Duterte still added:

Meanwhile, back in April of this year, Duterte said that he will waive from Covid-19 vaccination slot, saying that the government should prioritize those who really need them, those who can still “live productively.” According to Duterte:

“Me, I will waive receiving a vaccine. Whoever wants my slot can have it…”

Yesterday, the European database of suspected drug reaction reports called EudraVigilance, a watchdog that also tracks injuries and deaths following the COVID experimental vaccines, has reported yesterday that there are already 15,472 deaths and 1.5 Million injured reported to them.