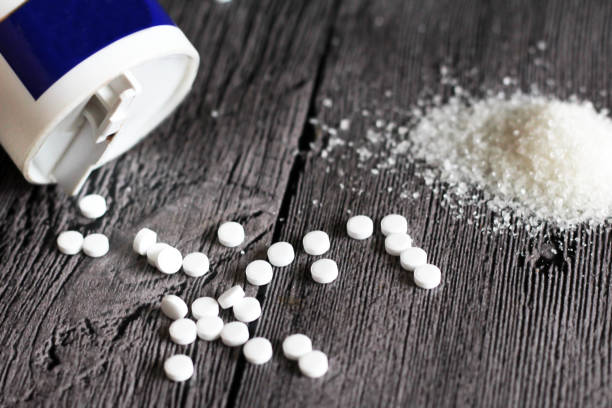 When it was discovered in 1965, aspartame, an artificial sweetener still very common today, has been subject to scrutiny by many experts due to its potential health risks. A scientific article published in 2004 stated that in 1980, researchers have discovered that aspartame “induces brain tumor” and that “the Board of Inquiry of the FDA denied the petition for approval”. However in 1981, a newly appointed FDA Commissioner named Arthur Hull Hayes approved aspartame, disregarding the previous ruling which did not allow the use of this toxic compound for sixteen years. During these early years, the effects of aspartame have been documented by the FDA and in 1995 the agency released a list of “ninety-two aspartame symptoms reported by thousands of victims”.

“These new findings confirm that aspartame is a chemical carcinogen in rodents. They confirm the very worrisome finding that prenatal exposure to aspartame increases cancer risk in rodent offspring. They validate the conclusions of the original RI studies.

These findings are of great importance for public health. In light of them, we encourage all national and international public health agencies to urgently re-examine their assessments of aspartame’s health risks – especially the risks of prenatal and early postnatal exposures.”

Some of the products which have aspartame are Coke Zero Sugar, Diet Coke, Diet Pepsi, Fresca, Minute Maid Light, Seagram’s Diet Ginger Ale, Sprite Zero, ice cream, and thousands of other products in the supermarket today. Despite decades of warnings and petitions from experts and consumer organizations, different companies still use aspartame for their products. They are successful in lobbying because they use tremendous amount of financial power and influence to bribe policy makers and politicians for approval. And with this government approval, they can still advertise and promote this poison to the public while blatantly lying. For example, aside from illegally claiming that their diet soda can fight weight gain, the Coca-cola Co. also claims on their website:

“Aspartame is safe. It is one of the most thoroughly researched ingredients in the world.

Science and health professional organizations have affirmed sugar substitutes, like aspartame, are safe. So have food safety authorities, like the U.S. Food and Drug Administration (FDA).”

One strong scientific proof that aspartame is neurotoxic is the work of a medical doctor named H.J. Roberts entitled “Aspartame Disease: An Ignored Epidemic” in which Roberts presented 1,038 pages of symptoms and diseases triggered by this compound, including the history of its approval. Meanwhile, another expert named Dr. Ralph Walton, the Professor and Chairman of the Department of Psychiatry in Northeastern Ohio Universities College of Medicine has also produced scientific papers detailing the “behavioural and psychiatric problems triggered by aspartame-caused depletion of serotonin”. In February of 2008, Dr. Ralph Walton issued a letter stating the following:

“My first publication on adverse reactions to this artificial sweetener was a case report: Walton, R.G. Seizure and Mania after High Intake of Aspartame Psychosomatics March 1986 27(3) 218-220.  I concluded that my patient’s clinical course could best be accounted for by her aspartame intake. One of the reviewers for this paper was Dr. Richard Wurtman, Chairman of the Department of Cognitive Sciences at M.I.T. Dr. Wurtman contacted me and asked me to keep track of other patients with seizures which I felt could be related to aspartame consumption.  I did so and was eventually invited by Dr. Wurtman to present a paper at an M.I.T. conference – “Dietary Phenylalanine and Brain Function” held May 8-10, 1987.  That paper forms the basis of a chapter in a book edited by Dr.Wurtman: Walton, R.G. Chapter 18 The Possible Role of Aspartame in Seizure Induction; WurtmanR.J., Ritter-Walker, E. Dietary Phenylalanine and Brain Function. Boston Birkhauser 1988.

In both of my original papers I suggested that appropriate double blind studies needed to be done.  I undertook such a study, which was published in Biological Psychiatry in 1993: Walton, R.G. Hudak,R.Grrene-Waite, R. Adverse Reactions to Aspartame: Double Blind Challenge in Patients from a Vulnerable Population. Biological Psychiatry, 1993;34:13-17. My hypothesis in this study was that since aspartame led to an increase in norepinephrine precursors, coupled with a simultaneous decrease in serotonin precursors, the potential alteration in central nervous system catecholamine/indoleamine balance would pose a special challenge for patients with a mood disorder.

In summary, Dr. Green, after studying and researching this question for over 20 years, it is my firm conviction that aspartame lowers seizure threshold, mimics or exacerbates a wide variety of neuropsychiatric disorders, contributes to the incidence of certain cancers, and because of its impact on the hypothalamic “appestat” plays a significant role in the world-wide epidemic of obesity and type 2 diabetes.”

“When diet sodas and soft drinks, sweetened with aspartame, are used to replace fluid loss during exercise and physical exertion in hot climates, the intake of methanol can exceed 250 mg/day or 32 times the Environmental Protection Agency’s recommended limit of consumption for this cumulative poison.”

It was clear that experts like Dr. Ralph Walton, Dr. H.J. Roberts, and Dr. Woodrow Monte and many others have proven that aspartame is not meant for human consumption. It was proven that this artificial sweetener “causes headache, memory loss, seizures, vision loss, coma and cancer”. It was also proven to exacerbate the symptoms different diseases and conditions such as “fibromyalgia, MS, lupus, ADD, diabetes, Alzheimer’s, chronic fatigue and depression”. It also “liberates free methyl alcohol” and this is very dangerous as chronic methanol poisoning affects the dopamine system of the brain which causes addiction. And Methanol, according to Dr. Monte, “constitutes one third of the aspartame molecule and is classified as a severe metabolic poison and narcotic”.

In addition, Dr. H. J. Roberts also claims that aspartame even “caused the epidemic of obesity because it makes you crave carbohydrates so you gain weight, and the formaldehyde accumulates in the adipose tissue (fat cells)”. And lastly, Dr. Roberts also claims that aspartame is responsible for the epidemic of diabetes as “it not only can precipitate diabetes but simulates and aggravates diabetic retinopathy and neuropathy, can cause diabetics to go into convulsions and interacts with insulin”.

To watch Dr. Ralph Walton’s full interview about aspartame, go to this link: