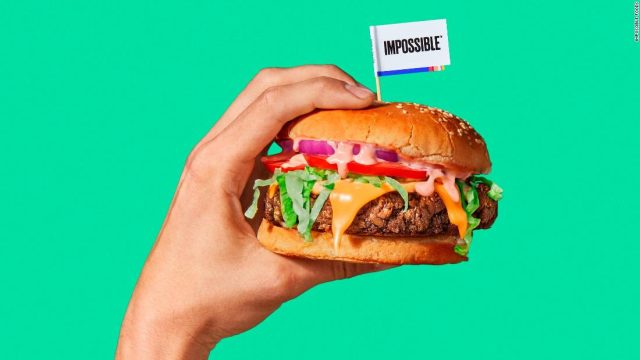 On August 2019, Burger King started selling the Impossible Whopper throughout the US, a type of so-called plant-based burger, manufactured to cater customers who are vegans and vegetarians or even those who consider cutting meat from their diet. Of course, this has been packaged with hype from the biggest mainstream media and celebrity endorsement, especially by those who’ve invested on this new marketing fad.

As usual, the ways they market this include strategic age bracketing; with menus specifically crafted for both adults and children who are “omnivores, reducetarians, and flexitarians” – “the bigger size of the population”. CNN reports:

“The meatless version of its signature burger has been so successful that Burger King is launching a plant-based “Rebel” Whopper across Europe, and it’s testing more plant-based options, including the Impossible Whopper Jr. and a new Impossible Burger, in the United States.

Restaurant chains have been enthusiastically adding plant-based options to their menu to attract eaters who want to reduce their meat intake for health and environmental reasons. That demographic has been helping to drive a potentially lucrative sector: Barclays predicts that alternative meat could reach about $140 billion in sales over the next decade, capturing about 10% of the global meat industry.”

“It also illustrates the seemingly unstoppable growth of Impossible Foods, which spurred a large increase in sales for Burger King last quarter, and which rolled out its packaged product in grocery stores across the country in September.”

What’s more interesting about this is that another seemingly hype-driven website called “Fueled By Science” wrote that this genetic engineering product is “arguably even safer than beef” and are a “great option for vegetarians and vegans”. The same article also states that, a claim which is unbelievable for people who are highly critical and educated about the issue of food, “the leading companies offering fake meat are mission-driven” who “aspire to reduce animal suffering, to feed a growing population, and to improve the health” of the planet. However, according to “Beyond GM” website:

“The Impossible Burger is already on sale in selected outlets across the US. Backed by $257 million in venture capital funding from Khosla Ventures and Bill Gates amongst others, manufacturers Impossible Foods, have pushed it onto the marketplace on the basis of a self-affirmed GRAS (Generally Recognised as Safe) status. Its panel of paid experts determined that the SLH proteins were structurally similar to natural ones and therefore safe. The FDA, however, rejects this claim.”

“Look behind the scenes of the new meat and animal product analogues and you will see a Who’s Who of Silicon Valley magnates. These include Microsoft founder Bill Gates (chickenless eggs), Sun Micorsystems’ Vinod Khosla and (egg and cheese analogues and lab-grown meat and leather) and twitter co-founders Evan Williams and Biz Stone (the newly launched Beyond Meat chicken analogue).

Among the tech giants involved in this venture are Sergey Brin (Google) and Peter Thiel (PayPal) who is “working on using 3D bioprinting to produce leather and, one day, meat”. Meanwhile, regarding Bioprinting technology, Beyond GM’s article continues:

“Bioprinting uses a biological ‘ink’ containing various types of cells. The ink can be printed out in multiple layers, and in three dimensions, to produce a structure such as a kidney or an ear. The ultimate end result is a steak you can print out from biological materials.”

This so-called plant-based “impossible burger” is produced using a genetically engineered yeast culture. The purpose of it is to make the burger “cook and taste more like meat”; appearing to bleed while being cooked. The industry pushing this “techno food” deceptively says “humans have been eating this kind of heme for “hundreds of thousands of years”, a statement which is not true because this ingredient is novel which only emerged in the last few years. Beyond GM’s report continues:

“…the FOIA documents reveal that up to a quarter of this heme ingredient is composed of 46 “unexpected” additional proteins, some of which are unidentified and none of which have been assessed for safety. Unexpected proteins are common in genetically modified foods and are the reason why campaigners believe that regulators’ reliance on the concept of ‘substantial equivalence’ (the idea that if a GMO food looks and tastes the same it can be considered the same as non-GMO food for regulatory purposes) is both false and risky.”

Impossible Burger is produced using soy leghemoglobin (SLH). This is being questioned especially when ETC Group, along with consumer and environmental organizations, obtained documents through Freedom of Information Act which states that the letter SLH has not been proven to be safe yet. Aside from that, there has never been a  study about the long-term effects of this. ETC group states:

“The current arguments at hand, individually and collectively, were not enough to establish the safety of SLH for consumption.”

It was clear that the FDA didn’t declare it a safe. According to the agency, “SLH has never been consumed by humans and may be an allergen” and that “the safety information submitted by Impossible Foods was not specific enough”. It also emphasized:

“Although proteins are a part of the human food supply, not all proteins are safe. Information addressing the safe use of modified soy protein does not adequately address safe use of soybean leghemoglobin protein from the roots of the soybean plant in food.”

There are so many observed and recorded problems with genetic engineering on food. For example, in 2016:

“Scientists at Kings College found that a genetic modification altered levels of different proteins in strain of GMO maize, NK603, which is widely consumed by humans and animals. Amongst other things the GMO maize was found to contain substantially higher levels of the polyamines cadaverine and putrescine, which can heighten allergic reactions and are involved in the formation of carcinogenic substances in the body.”

Impossible Burger is a highly processed product. Dishonestly promoted as “plant products”, the industry claims that it’s totally similar to the real meat pattie. This is not true, of course. According to Beyond GM, Impossible Burger “is several steps removed from its plant-origins” and that “to get the wheat and soya proteins to clump together like those in meat, and therefore give the burger some ‘bite’, they need to be ‘plasticised’.” It continues to explain:

“Water and powdered proteins are poured into a machine with two long, intertwined screw-like shafts. The mix is churned through these whilst alternatively being heated and cooled to turn it into fibres that can be moulded together in a burger shape and have a meat-like bite. This extrusion process is the same basic one used to make plastic from maize or soya. Starting at the lower end of the market with one of the world’s favourite fast foods is, of course, a clever way to try and hide the potential shortcomings of plastic food.”