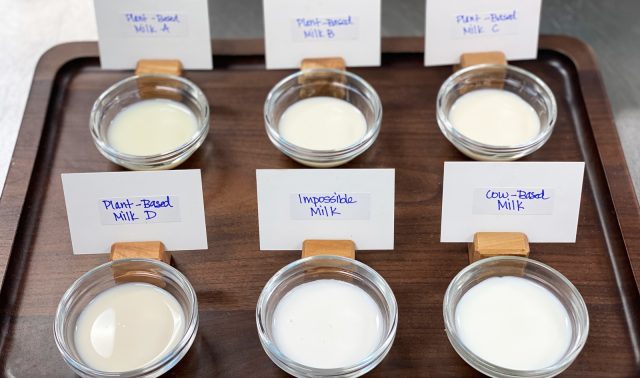 Since soy brought a massive revolution to the food industry, it has been used to create virtually almost everything and even became a staple food for the significant amount of population. It has become a kind of miracle to many, both for the industry and as essential human need, especially to those who shifted or about to shift or even were already vegetarian/vegan since birth. On the other hand, knowing the real situations in terms of health industry and the food industry, this might also suggests that there is a hidden agenda why people are being economically driven to eat the things they should not really put inside their body, at least not on a regular basis or on a massive quantity, by not encouraging to learn deeply about food, how to plant and cultivate them, and learn about how to take care of our health through what we eat. Sometimes in worst cases, people are even being prohibited to do farming or gardening and physicians who want to practice natural healing method are being demonized and even punished by their government.

And just a few years recently, the age of genetically produced and engineered protein has arrived. The time has come when technology does not only extract soy protein and turn it into something interesting and tasty but they can now make it out from a lab-grown protein cultures, modifiable later for other various so-called plant-based meat and meat glue products. After these companies openly admitted to developing their popular meat products, including the ones that they already made available to the public such as their impossible sausage, hotdogs, impossible burger, soon they will also have the impossible chicken (breast, wing, legs, etc.), and the impossible milk in which they now frequently discuss publicly. By the way, will this be really dearly embraced by the vegan community in general?

Soybean is one of the leading main compounds for all of these so-called impossible foods and industries do not stop from just few innovations; they want to produce everything, sometimes even at the expense of the public. On this, the New York Times reported:

“The quest for cow-free dairy is expanding. In Oakland, scientists at a community science lab are trying to make their own open-source recipe for lab-made cheese. And a start-up in Boston called Motif Ingredients is engineering a variety of ingredients to replace traditional dairy, eggs and meat proteins.

Another company, Perfect Day (originally Muufri), may be the furthest along in perfecting a recipe for lab-made dairy. The company produces whey protein and mixes them with other ingredients found in traditional dairy — fats, carbohydrates, calcium and phosphates. In early July, a limited-edition batch was released, with flavors including chocolate, vanilla salted fudge and vanilla blackberry toffee; it quickly sold out.”

The most popular producer of genetically engineered plant-based fake meat is Impossible Foods. It is founded in 2011 by a Stanford biochemistry professor Pat O. Brown. He was known for creating heme through genetic engineering and fermenting yeasts; a compound said to contain iron that is “responsible for the colour and taste of ground beef”. Some restaurants in many different parts of the world are right now using his company’s products, the impossible beef or the impossible burger/patty, and most probably, his heme is now being used by different food and flavouring companies. In the coming future, according to Brown, his company might also produce “vegan chicken breasts and steaks”. As he stated:

“We have made prototypes from a number of different plant sources… soy is a very good choice from a nutritional standpoint and a supply chain standpoint, and for those reasons, I think there’s a decent chance that it will be the base protein for our product.

“Their process is loosely comparable to the way Impossible Foods makes meatless burgers. Microbes, such as yeast, are given the genetic instructions to produce the dairy proteins. The microbes are then cultivated en masse, with nutrients added and the temperature adjusted. Eventually the organisms start churning out large quantities of the proteins, and these are isolated and added to various recipes.

For the Impossible Burger, the essential protein is a molecule called heme, which is abundant in animal muscles and gives the burger its meaty flavor, and even makes it appear to bleed. New Culture is focusing on producing casein, a protein that coagulates to give mozzarella cheese its stretchy texture.”

The long-term goal of Impossible Foods, according to Brown, is “to accelerate the switch to a sustainable food system — starting with the Impossible Burger and expanding to a range of delicious products, including pork, chicken, fish and dairy”. Its mission is “to dramatically reduce the amount of land, water and energy required to support the world population by 2035.” But to really have a genuine sustainable answer to our environmental and economic problems, industries must talk together along with other important members of our society, especially with the guidance of those who are educated well enough on the issue. Companies must not establish dominion over one another and science should be open to be scrutinized and willing to defend its position instead of attacking back in an unscientific manner. Science is about putting out facts together in the public view regardless of which interests it may negatively affect.

So adding to the concerns regarding the coming so-called plant-based milk is the use of TG or Transglutaminase. According to NCBI:

“Transglutaminase is an enzyme that catalyses the formation of isopeptide bonds between proteins. Its cross-linking property is widely used in various processes: to manufacture cheese and other dairy products, in meat processing, to produce edible films and to manufacture bakery products.”

Even though TG is approved by the Food and Drug Administration (FDA) for generally recognized as safe (GRAS) label, reports still say that “it may increase intestinal permeability, which can worsen symptoms in people with celiac disease by creating a higher allergenic load on the immune system” and “it’s even been suggested that the surge in people diagnosed with celiac disease may be linked to the increased use of transglutaminase in food”. Interestingly, the European Union banned the use of transglutaminase in food in 2010 over safety concerns so it’s strange that in America for its proponents this isn’t a big deal. Therefore, many experts warn consumers about these artificial foods also known as plant-based chicken nuggets, sausages, hot dogs, seafood imitations, bacon crumbles, and other synthetic foods that contain TG enzymes; especially individuals with digestive diseases and food allergies.

There is an on-going debate within the scientific community regarding the potential neurotoxic effects of TG. Studies are in increasing number showing the link between synthetic TG and toxic effects on the brain and body. Most TG is created through the cultivation of bacteria using the blood plasma (clotting factors) from cows and pigs while some are made from cultivating bacteria using vegetable and plant extracts. There are many types of TG but it is mainly use in binding protein compounds together to create an artificial meat product.

On the political standpoint, this is a tricky issue given that there are obviously more profound realms beneath this matter, not just about what suits one’s taste or enjoyment of a particular culture or society. But one factor we can really raise is the issue of the society’s dependence toward the system; in this particular case, to the food industry. Instead of acknowledging the necessity to garden as the same primal force behind our instinctual urge to defend our freedom, society look at it as only a matter of situation, opportunity or worst, just a recreational choice; not the ultimate expression of independence and not our basic fundamental rights. Sure there is a serious problem with meat and dairy industry and these areas desperately need holistic fixing, therefore everything must begin by shifting the grassroots into gardening or farming culture while introducing them to the current risks and problems and the paradigm of natural solutions; not by genetically creating everything.