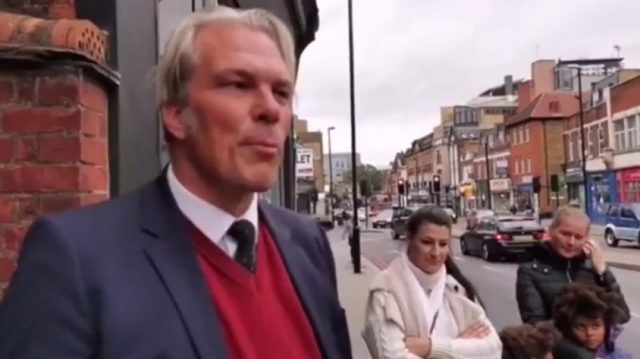 After 24 hours of being detained without a charge, Dr. Heiko Schoning was released by the London police on Sunday. Dr. Schoning, one of the founders of ACU, the COVID 19 Extra-Parliamentary Inquiry Committee in Germany, was arrested after speaking at a massive protest in Trafargal Square in London. The protest addresses the COVID 19 fake pandemic and the governments “unlawful” lockdown measures in the UK which not only caused suffering and death to many, patients and non-patients alike, as reported by various sources, but also an unnecessary economic shutdown in many parts of Europe.

The Coronavirus Act 2020 of United Kingdom was passed in late March and paved the way for the UK government to impose “harsh” policies with fines on its citizens. And now six months later, a huge protest which attended by thousands of people was held at Trafalgar Square to demand to the government to stop the fear mongering and to be transparent on the real facts about the current situation, holding signs such as “We Do Not Consent” and “Think Before It’s Illegal”.

After his released, Dr. Schoning was interviewed. Here is the full transcript:

“What happens here in Britain… and think of what’s going on in this country. If you don’t have the right to speak out at the very place of speaker’s corner in Hyde Park, what is this country going to? And what is the world going to? To speak out something is not an offense, and even under this the very doubtful lawyers with COVID 19, in this, is not an offense to arrest somebody.

But you can see what happened yesterday on Hyde Park on speaker’s corner, people gathered peacefully, listened, and the police came, don’t ask, I did not do any resistance but straight-away they arrested me, handcuffed me, and took me away. Took me away to talk to you and to tell the truth, the truth about what’s going on on COVID 19.

I’m one of the founders of the Extra Parliamentary Committee on COVID 19. You can read this up on ACU2020.org. That’s translated into 10 languages. Because the parliaments of the world failed to establish a proper inquiry committee, we the citizens, have the duty to perform this. And we in the COVID 19 Extra Parliamentary Inquiry Committee, we performed more than 20 hearings with experts, with witnesses. And I invite you, internationally, to take part of this movement. And I’m happy to say that in a lot of countries, not only in Europe, not only Spain, not only the Netherlands, in a lot of countries all over the world, even in Latin Americas, medical doctors stood up, told the truth, and the inquiry is going on.

And I’m happy that this date now, with this demonstration at Trafalgar Square, now in the end of September established something like “The Doctors of Truth – Great Britain”. So thank you very much for all your support. So we will go on and we need to stand together. At the 27th of August, we had a great rally, a great demonstration in Berlin, more than one million people attended. And this was a great demonstration, a great festival of peace.

So I would like to invite you on the 10th of October 2020, save the date, 10-10,2020, we will be millions in Berlin to demonstrate peace or justice, that these unlawful things won’t go on. And I need to emphasize for everybody that we will work with the people, like the government, like the police, like the army officers, to think of now is the time to be brave. Now is the time to speak out. Now is the time to demonstrate that we are a family of mankind. Don’t let us divide. Divide not into races like we have experienced in the 30’s in Germany and not divide into so-called sick people or so-called vaccinated people.

So this is a division and we are one family of mankind so think what’s going on. And behind all these is not medical pandemic. We showed all the truth, all the things. And guess what, what the police seized. I have now my suitcase with me. But what they seized, my telephone, my computer, plus a book “Coronavirus False Alarm” from professor Karina Reiss and professor Sucharit Bhakdi. They seized it. So you see? They’re afraid. They’re afraid of what? They’re afraid that we would get in contact so they seized the mobile phones. They’re afraid of the book because scientifically, all facts are laid down. And the good thing is, this book is not only published in German, it’s now published in English – COVID 19 False Alarm. And this book has been the number one book, best seller, and hopefully, this will be the same in Great Britain.

So the good message to the uninformed people is, THERE IS NO MEDICAL PANDEMIC, you don’t need to be set up in fear about a deadly virus. All data shows there was no more harm than a normal flu. The data in Germany show this and all over the world.

So we need to ask ourselves how this orchestrated plandemic could evolve? And if you just think, “OK what happened? What are the effects behind?” Think of the year 2008, the financial crash. The financial system is dominating everything and the system crashed. And it was clear who were the perpetrators, where’s the banks and the private owners? And did we heal the system? No we did not. They put much more money into this insane financial system and they bought time. Everybody told this. Well, now we got 2020, and it looks like they have a plan, a “great reset”. And this great reset what is the title of the “World Economic Forum” in 2021 is the great reset of the financial system.

So it has nothing to do with this medical thing. But who’s to blame to? In 2008 it was clear; it was the banks and their private owners. Now, they blame a virus, a coronavirus. And that’s the whole thing so please wake up and please align, think of the mankind, think that we all a family of mankind and be peaceful if you go to your neighbors, go to your family, and just inform.

So thank you very much indeed, we will go on and save the date 10-10-2020. There will be millions and this will be peaceful. Last time, Robert F. Kennedy Jr. was with me on the stage and all football fans in England, even a world champion, German world champion was with me on the stage and we spoke out what is going on, what is the truth. So all over Europe, Berlin invites Europe, 10-10-2020. Thank you very much!”