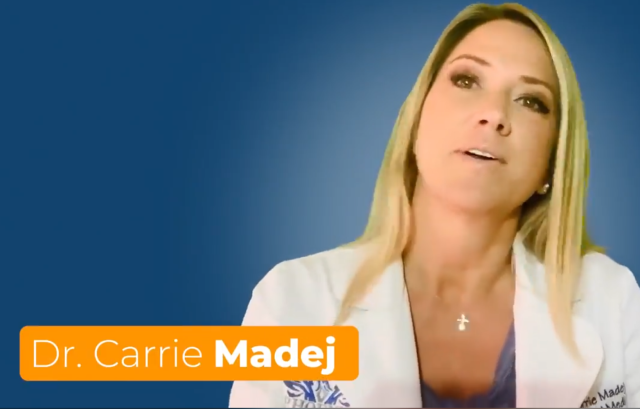 “The recombinant RNA and DNA technology will cause permanent and unknown genetic changes in a person’s body. Once their DNA is changed, he or she will live with that change for the rest of their lives along with the ripple effects from that genetic change. So who knows what that change will be. There is no going back.”

You’re probably familiar with this claim as it was debunked (so they say) by the mainstream media (MSM) several times in different reports. Dr. Madej produced a video last June talking about the scientifically proven dangers of mRNA vaccine; the “magical” answer to a make-believe monster called COVID 19; the one always being flaunted in the media right now, the one politicians are excited about, and the one that will become the savior of the whole world! In reality, however, this will always remain an illusion as they still cannot provide evidence of coronavirus infection up to these days, the most important request by some experts the media won’t talk about. Up to now, the World Health Organization (WHO) still cannot provide the proof of isolation and the proper application of Koch’s Postulate for the so-called COVID 19.

Dr. Carrie Madej, an Internal Medicine Specialist in McDonough, GA who’s been in the profession for over 19 years after she graduated from Kansas City University Of Medicine Bioscience College Of Osteopathic Medicine medical school in 2001, claimed she’s been studying about the subject of genetic engineering and transhumanism for quite enough years already that’s why she’s confident enough to talk about it. In her video (see the link below), she talked about DARPA, the Pentagon’s Defense Advanced Research Projects Military Agency, genetic modification, artificial intelligence, hydrogel technology, etc. According to her:

“There is not good science yet to prove the efficacy of these vaccines. In 2010 DARPA started focusing on DNA and RNA vaccines and they had a synthetic DNA vaccine that could be delivered via non-invasive electroporation, which is using a sticker with micro needles in it on your skin—you can barely feel it go in there. And in their words “it is to enhance and subvert” humans at a genetic level. This is around the same year Bill Gates heavily started to fund the DNA and RNA vaccines with the companies mentioned above.”

Madej said that COVID vaccination is being developed with hydrogel technology which can deliver agents “which will become part of the body and provide a lifetime feedback mechanism for total control of humans connected to an artificial intelligence (AI) platform”. Hydrogel in vaccines is something we completely don’t know about, experts like Madej and others are repeatingly warn, thinking thoroughly about entering a new territory in the fields of health and medicine which will also mold and manifest our future society. Madej added:

Just like in every field in research and development (R&D), the significance of vaccine also is much fueled only by its funding. The rich pharmaceutical companies, naturally, love to hype their products and enjoy consumer spotlights that’s why they gamble big money. This may look scientific but it is actually a scheme to cater big pharma agenda using the best scientists money can buy and the most effective propaganda media advertisement money can bribe to tell the lies, repeatedly. Madej explained:

Another important thing Dr. Carrie Madej is raising is the unknown synergistic effect of the ingredients of this vaccine, not to mention the combination of all of today’s vaccine. According to her, this could have a “hundred times more detrimental side effects”. It makes you wonder why they’re allowing this cocktail of harmful chemicals in vaccines when there’s no study showing it cannot create damage to the body organs. Regarding the safety and efficacy of COVID vaccine, this is what Dr. Madel said:

“They are not using good scientific methodology at all. They have no randomized placebo-controlled trials for any vaccine, which is the gold standard for any therapy to be approved by the FDA. They’re not following any sound scientific protocol to make sure this is safe for us, to make sure it would work for us, or to know anything about it—and they want to inject the vaccine and DNA altering cell lines into the masses.”

Finally, warning the public about indemnification for the vaccine companies, Dr. Madej stated:

“The vaccine manufacturers, referred to as Big Pharma, were made exempt from product liability in the 1980s. Meaning that if a vaccine causes seizures, paralysis, etc., they as a group are not liable. Big Pharma is also exempted from randomized control trials. They are doing this with the COVID-19 vaccine, but they are also doing this with other vaccines recently where they can just say, “Well, we’ve had the MMR vaccine before, we don’t need to do that—we may have tweaked it a little bit but it’s still the same thing.”