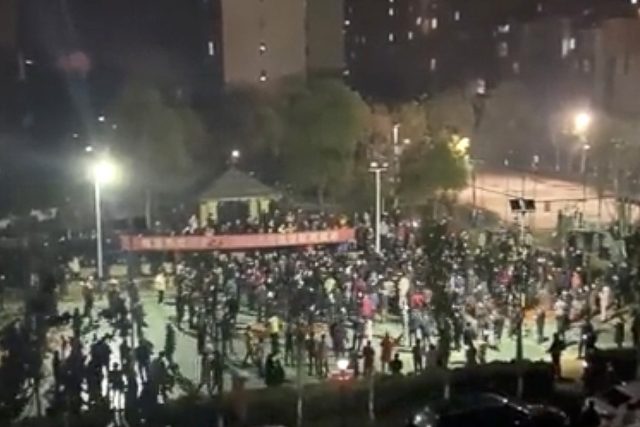 Thursday, March 12, 2020 – In China, some residents of Yingcheng, Hubei, near Wuhan, the epicenter of the COVID-19 outbreak, gathered and defied lockdown to protest against the high price of their basic necessities, especially food. According to these residents, they are forced to pay their groceries high as it is being highly controlled by the local government departments.

In a social media post by the city government, also tasked as the COVID-19 emergency command centre, hundreds of people started to gather at around 7:30pm at the Sea Mountain residential complex. The protest has erupted during the detention of a person named Cheng, a resident of Sea Mountain and was detained and charged with “unlicensed sales” when he tried to supply the neighborhood with food on much lower prices using his personal connection. Though. Cheng was released by the local authority after an hour. However, the protest was dispersed when the police came, along with local government officials.

Meanwhile, according to one person only identified as Zhou, this overpricing of food and other daily essential things have been happening for more than a month and they have no choice for better and cheaper qualities that’s why locals have decided to do something and refused to being quiet to stop it. She claimed that the vegetables being provided by these government departments were “old and no longer edible”.

On Friday, as a response to the protest the city government released a statement promising to provide more supplies by increasing channels and by making sure the prices would be lower too. It also added that they would create more task force for the assurance of better transports to efficiently direct the goods from production to chosen distribution shops. The Xiaogan government also acknowledges the problems with the quality and the overpricing of the goods and promised to strengthen its measures on these matters. According to one representative named Liu, it is because the government put much priority on the lockdown that’s why it overlooked these important issues. Meanwhile, local media also reported that the shops responsible for overpricing have been penalized.

Commenting on the issue, the director of the SOAS China Institute in London Steve Tsang stated to the South China Morning Post that the current control system by China “seeks to control everything, including the supply and pricing of food but it cannot do so as effectively as it would like and profiteering by some led to unintended consequences. Tsang also said the protest appeared to be simply “against an injustice that most cannot afford. With the government saying that China is now on top with the virus, people are behaving more normally and thus refuse to tolerate the apparent profiteering.”

Meanwhile in Beijing, on March 6, less than a week before the protest in Sea Mountain of Yingcheng City, residents in an apartment complex in the city of Wuhan shouted down – “It;’s fake. It’s fake!” – as Vice-Premier Sun Chunlan, a senior government official led an inspection tour of the situation in the area weeks after the lockdown. Since by mid-February, these residents were prohibited to shop for necessities while the local government ensured mass deliveries of groceries themselves. According to these residents, those deliveries have been made in many places and were set on time during Sun’s visit. As protesters claimed it was a set-up, they also yelled, “It’s fake! It’s all faked! It’s a show put on for you. Everything is faked!”