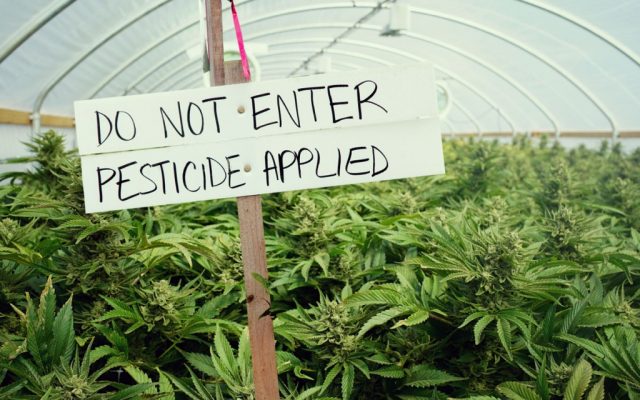 Back in 2009, the Los Angeles City Attorney’s Office acquired and then tested three samples of medical cannabis available to patients through dispensaries. The test found out that high levels of certain types of pesticides are in those commercial marijuana products and much like in tobacco, pose an alarming threat to the consumer. In 2013, a study published in the Journal of Toxicology clearly demonstrated that indeed, the levels of pesticides existing in commercial marijuana in California are definitely a concern to both producers and consumers, for both medical and recreational use. However, depending on ways of consuming, and depending on the device used, it was learned that residues from these chemicals were mostly as high as almost 70%, a substantial amount that can seriously affect the user’s health. This is why some people think this might be the reason for Cannabinoid Hyperemesis Syndrome (CHS).

Some of the chemical pesticides found are permethrin, bifenthrin, and diazinon. Another residue also found in the samples is of myclobutanil, commonly used in crops to protect against fungi, and of paclobutrazol, a plant growth regulator. Ingestion alone is significantly toxic for the human body; however, when converted to smoke, the potency of these chemicals will become more hazardous; mostly carcinogenic especially in prolonged exposure. There is no doubt that exposure to these chemicals through smoking is exceedingly high and could not be downplayed that’s why both the public and government sectors should really take double measures to address these alarming discoveries and demand organic cannabis. It is so alarming that in 2016, Colorado issued a report in the American Journal of Public Health stating the need to create a “robust regulatory and public health framework.”

To put into perspectives, a smoker using a glass pipe could possibly inhale 60-69% of the residue while smokers using filtered water pipe can still get 0.08-10%. Meanwhile, users smoking it with unfiltered water pipe can inhale 42-59%. Some known serious effects of the chemical myclobutanil, for example, are diarrhea, headache, nosebleed, vomiting and abdominal pain. These effects are already deterrent, as observed in consumer’s daily crops that’s why farmers are advised to use them minimally. However, what should cause more alarm is that when heated with fire, this chemical compound turns into hydrogen cyanide, a very poisonous chemical known to have been used for killing people in gas chambers that causes convulsions, respiratory problems, palpitations, and vomiting.

The effects demonstrated above are from smoking. This may also include vaporizing or inhalable products. Therefore some concerns also point out to the lack of data analyzing the effects of these residues through ingestions. This is also important as many edibles are now widely available for the mainstream consumers. For sure the presence of these pesticides can also be found in those products that’s why it is really crucial for consumers to take action and demand solutions. Marijuana in its purest form alone has considerable potentials for hazards, especially when abused or consumed on a daily basis. That’s why real and efficient health measures should be implemented for those who want to take the risks using it, medically or recreationally. That’s why it’s also very important for consumers to demand organic marijuana.

To learn more about the serious dangers of pesticides in commercial marijuana and what needs to be done, we highly suggest you to visit these links: