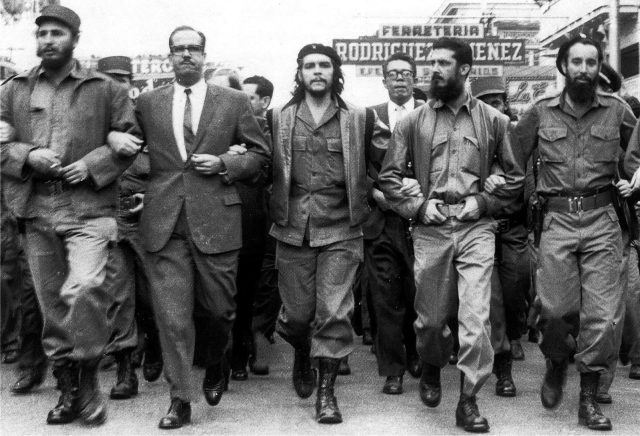 Every revolution has its own heroes and every revolutionary has his or her own legacy that people of the following generations admire and see as an inspiration to live by. However, most revolutions in history are bloody and no doubt, atrocious. But needless to say, some people, especially those who are in favor of absolute means to achieve this revolution, have no problem with killings and brutal retributions of any kinds. Ernesto Che Guevara was one of these kinds of people.

Regarded as almost like a pop icon in many parts of the world, Che Guevara is known to left a heroic legacy that you can see his face in t-shirts worn especially by teenagers and college students attending protests, if not rock concerts. The band “Rage Against The Machine” also puts his face on stage during their gigs for fans to see while doing the mosh. Hollywood also romanticized his story as a charismatic benevolent person caring for the poor and the oppressed. You can even sometimes see an image of his face in mugs and other souvenir stuffs similar to Starbucks or Nike. His face, that seemingly became a logo, was also used by a tobacco company for a, perhaps, “revolutionary” to enjoy and to use as a suicide instrument.

But who exactly is Ernesto Che Guevara and what really are the not-so-known things that he did? Che was born in a middle-class family from Rosario, Argentina in June 14, 1928. According to his “official” biography, which some also doubted, he graduated in a medical degree at the University of Buenos Aires. But later according to him in his own journals and notes of poetry, he became dissatisfied with treating patients as “saving people’s life requires more than just medical treatment”. One reason for this is that Che was an intellectual person who likes to read about philosophy and other subjects that help an individual progress and become a “useful and productive” member of society. This is one of the reasons why he got so interested in the writings of Karl Marx, Sigmund Freud, and other thinkers of the past.

Because of this also, he learned about socialism and communism and these ideas eventually inspired him to travel South America through a motorbike and “immerse with the masses” to learn more about struggles outside his own hometown. Because of this also, he became a guerilla leader of the radical left who campaigned ruthlessly against the brutal imperialist countries such as the United States. Che Guevara later helped Cuba achieved its communist revolution, helping Fidel Castro and others who also agree on this political idealism.

During this era, he helped the communist Cuba nationalized its industries – factories, banks, hospitals, printing press, etc. He also established universities that aimed to raise the citizen’s literacy. But along with this, he also initiated hundreds of trials and punished hundreds of Fulgencio Batista’s supporters. Prior to that, Batista, a fierce fascist dictator, was in total control of Cuba. Though, this man also killed thousands of people. But when Batista sensed his defeat, he left Cuba. Unfortunately, many of his supporters were left in the hands of these vengeful Cuban revolutionaries being led by Guevara and Fidel Castro.

“A revolutionary must become a cold killing machine motivated by pure hate. We must create the pedagogy of the paredón [execution wall].”

Ceasing control over the Island of Cuba, Guevara, Castro, and other Cuban rebel’s launched coldblooded retaliations against people who are considered “enemy of the revolution” without trials and judicial process. According itself to his statement: “We executed many people by firing squad without knowing if they were fully guilty. At times, the Revolution cannot stop to conduct much investigation.” And expressing opposition to freedom of speech, he stated: “We must eliminate all newspapers; we cannot make a revolution with free press.”

During these times, Batista’s soldiers and civilians alike were executed including traders, journalists, and even innocent people who disagreed on them. Many people were being put to prison camps to do hard labor including homosexuals and priests. Many of these people, including children, were beaten and tortured and some were even raped before being executed. Historical accounts stated that Guevara killed tens, if not hundreds, of people himself. As written on his journals used by Hollywood as one of the basis of his biographical movie entitled The Motorcycle Diaries:

“My nostrils dilate while savoring the acrid odor of gunpowder and blood. I’d like to confess, Papa, at that moment I discovered that I really like killing.”

Also, there were claims by historians that he had no problem with people working endlessly, as opposed to 8 hour limit per day. But despite this, many accounts proved that he worsened Cuba’s economy as opposed to their socialist goals to improve it. He also strongly criticized the Soviet Union for not attacking America with nuclear missiles. Favoring for the use of these devastating weapons of mass destruction against his enemies, he stated:

“The U.S. is the great enemy of mankind! Against those hyenas there is no option but extermination! If the nuclear missiles had remained (in Cuba) we would have fired them against the heart of the U.S. including New York City!”

In 1965, he went to Bolivia to convince alliance with Bolivians. But people in Bolivia were suspicious and didn’t support him. And in 1967, at the age of 39, he was captured and killed by the Bolivian US-backed militaries. However, his remain was not “officially” buried for decades. In 1997, his body was sent back to Cuba and then Fidel Castro and thousands of Cubans reburied him.