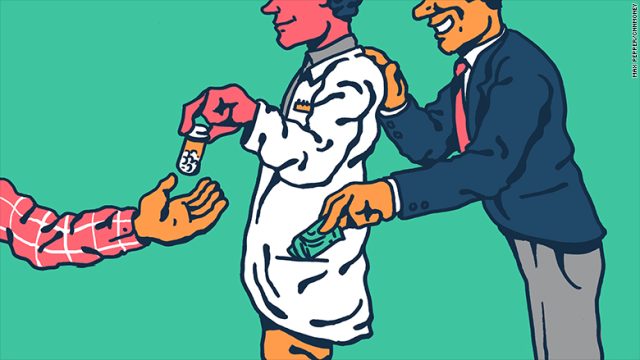 Doing a Google search about this subject, you can find so many legitimate studies, articles, and texts exposing and describing how the pharmaceutical industries maintain a dysfunctional, parasitic, criminal, and deceptive relationship with physicians. Along with dirty tactics such as intimidation, pressuring, and of course bribery, big pharmaceutical industries do all sorts of dirty tricks just to prioritize profit over cure or patients, by any means necessary! As a result, this culture of corruption in the health industry and in the public health department has enabled further regression not only to the millions of patients suffering but also to the quality of society we are trying to maintain.

According to the recent article (published this October 2019) by Vinay Prasad, M.D., associate professor of medicine in the Division of Hematology and Medical Oncology at Oregon Health and Science University,

“One study found that 85% of the experts who wrote widely used cancer guidelines had received payments averaging more than $10,000 from pharmaceutical companies. These guidelines mandate that Medicare pay for off-label use of cancer drugs. Research also shows that physicians who consistently put pharmaceutical money in their bank accounts are more likely to prescribe that company’s drugs.”

This means that there is a serious conflict of interest being swept under the rag by many health professionals involved in the decision making for public health. And just like cancer, it is very toxic and deadly.

Calling for the ending of this malignant culture, Dr. Prasad added,

In 2006, the Unilab Corporation in the Philippines, for example, made around Php 20 billion in their sales. This skyrocketing sale is a reality to many of these drug companies. This is because of their persuasive and most of the time aggressive marketing strategies and gimmicks through advertisements (sometimes using famous celebrities), fake advocacy efforts, sponsorships, trade promotions, and of course, bribery. These big drug tycoons spend billions of dollars for these efforts that’s why no wonder they will do anything to return that investment. However, this corporate mindset and treachery has destroyed public health while also debasing vulnerable doctors, especially those greedy money-hungry physicians, and turning them into legal drug pushers to create huge profit as a return to their favours. Such unethical practices have been infecting our healthcare and its professionals (and sometimes even our government) for quite a long time now.

Because most people are kept ignorant about diseases, prescription medications, and other important matters related to this subject, they often end up putting their 100% trust to their doctors. However, it is known that most doctor’s medical views and decisions are mainly influenced by the pressure of these drug companies and not by his or her extensive knowledge about the medication. And even worst sometimes, just to fill the quotas and earn lots of money, doctors desperately “invent” illness and misdiagnose patients. This is very common especially in psychiatric institutions. This deceitful persuasion is mostly a result of pharmaceutical sales representative’s pressure to physicians and other health professionals.

Other ways physicians make lots of money are through having strong ties with big pharma brands. They participate in the so-called clinically-based researches, speaking engagements to promote new drugs (or old drugs that has been found ineffective and even dangerous such as the Dengvaxia, etc.), medicine referrals, endorsing medical devices, etc. in exchange of the company’s wonderful offers such as “all expense-paid trips to luxury resorts”, long-term free accommodations, and all sorts of “gifts” that would, obviously, influence or even pressure their judgements and medical decisions. These unethical practices are all for financial gains; leaving the patients and ordinary citizens out of the equation; sometimes sending them to early death. These immoral and criminal practices are common not only in the Philippines but also in many parts of the world.