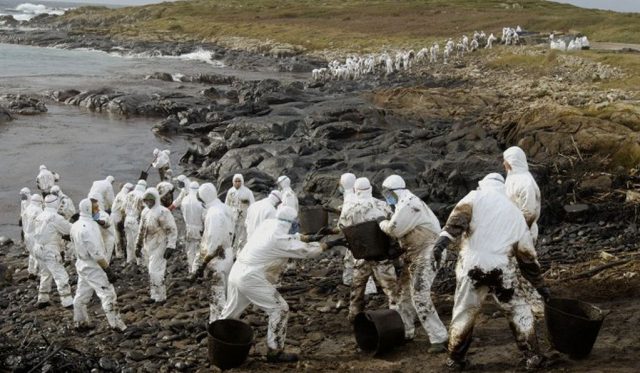 Home to many species of birds and sea creatures such as tortoise, sharks, sting rays, sea lions and hundreds of beautiful fishes such as the Mexican hogfish, Moorish idol, pufferfish, king angel fish, scalloped hammerhead and many more, a place called San Cristobal in the Galapagos Islands in Ecuador is now being placed under control after an oil spill that happened last Sunday, December 22, 2019. According to the official report from the Ecuadorian coast guard, a ship transporting 600 gallons of oil sank in a port of this historic island, contaminating the waters and marine life around the area. Authorities are now activating its emergency protocol to contain the oil and prevent further damages.

Famous for being a place of researches by a celebrated scientist Charles Darwin on the development of his theory of evolution in the 1800’s, the Galapagos Islands has become a UNESCO World Heritage site because of its rich flora and fauna, unique landscapes and diverse wildlife. However, because of its stunning wonders and rare species of animals, the Galapagos is now being threatened by tourism. As seen on the video footage, a large container has fallen on the ship when the crane collapsed while it is being loaded. Thankfully, only one person is hurt but sad to say species and resources near this area will be badly affected by the incident. This operation, according to SOS Galapagos, an advocacy and conservationist group, is “illegal and dangerous”.

Oil spills affect our environment so badly and it can be long term. It also affects the economy as it will disrupt the normal production of goods and services of a particular area. Oil spill poisons the animals and plants. This can also destroy the natural resources that are affected and this effect can even take decades before it can be totally fixed. However, fixing this is very expensive and can be a total burden to the government and other stakeholders. Worst, it can also permanently damage waterways, marine life, and other essential infrastructures on the land that cater society’s basic needs. When the chemicals on the oil mix with the water, it can create a toxic product called “mousse” that can damage the species reached and can destroy the wildlife habitat and breeding grounds. On this year alone, there were at least 5 oil spills previously recorded. These were on February, July, and October. These incidents happened in Brazil, Chile, and the United States.