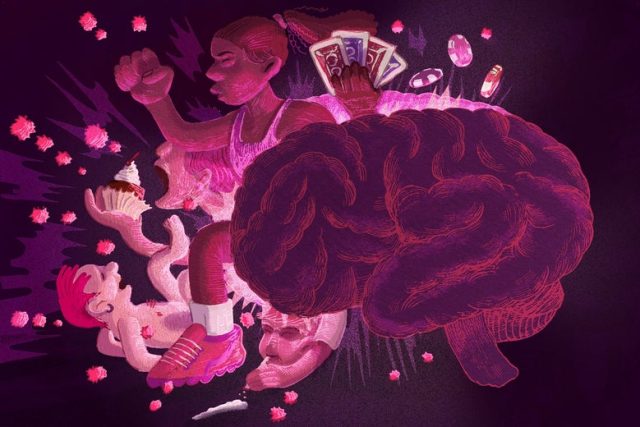 Many of today’s people don’t know where their discontent comes from. Many are chasing happiness through unhealthy ways while some pursue theirs even at the expense of harming or oppressing others. In general, this feeling of dissatisfaction haunts almost all of us; it’s just a matter of how it manifests in our lives and how we fulfill or manage it. But sad to say, some people are stuck in a situation where their unhappiness negatively dominates their life and their seeking for pleasure leads them to destructive and toxic urges and actions. Though, it is perfectly normal to seek for pleasure, shallow or profound. However, maintaining the balance between thoughts and actions for a healthier life is what is challenging and important.

As humans, all of us have this natural tendency because for immense amount of time our brain has evolved to be this way and to pursue this neurotransmitter called dopamine. This neurochemical, along with other so-called happiness chemicals in our brain, is the one responsible for pleasure that we feel in whatever activities in our lives that we really like doing. This is the reason why things or situations that are very pleasurable are very addictive. Because when these activities become so routinized and dull, the pleasure center of our brain will no longer work the same and will need more amount of stimulation.

There is no difference on our receptors when registering pleasures that are derived from various kinds of substance or activities such as sex, eating, drugs, etc. And, drugs and other behaviors that are addictive are shortcuts for our brain to derive pleasure and reward; the individual will no longer exert so much effort and spend so much time for getting them. These usually flood the brain with dopamine, releasing large amount in a fast and easy way. However, when our brain receptors are overwhelmed, dopamine released becomes lesser, requiring more amount of the substance or more or newer forms of the activities. So the dopamine’s impact to the reward center of the brain becomes less; this is also known as tolerance, a kind of adaptation.

So since the brain always chases this pleasure, it is also critical for it to constantly experience new things or tastes for an individual to derive happiness and satisfaction. And from activities, it demands more or looks for fresh experiences. As found in a study called the “Coolidge effect”, certain desire for novelty can be found all across biological species on this planet. For example, as observed in mice and in roosters, having constantly provided with new sexual partners keep the males of these species motivated in mating or reproducing/passing its genes. In humans, it can also be observed in couples but not only there, this can also have something to do with our tastes for movies, music and other forms of entertainments, fashion, trends, and food. Because of dopamine and other similar neurotransmitters, we humans constantly need new stimulants for us to be satisfied and happy. This is because desiring new sensations is part of the versatility of our psyche.

Serving as chemical messengers between brain cells, dopamine is also called the motivation molecule, an excitatory neurotransmitter that is very important for normal movement and balance and also for our memory, sex drive, digestion, and even cognition. Through the process called hydroxylation, dopamine is synthesized from the amino acid tyrosine. Just like serotonin, it controls our movement, mood, and whims. And just like serotonin, a deficiency of dopamine can result to mental health problems. And on the other hand, addiction by dopamine also leads to problems in physical health of an individual.