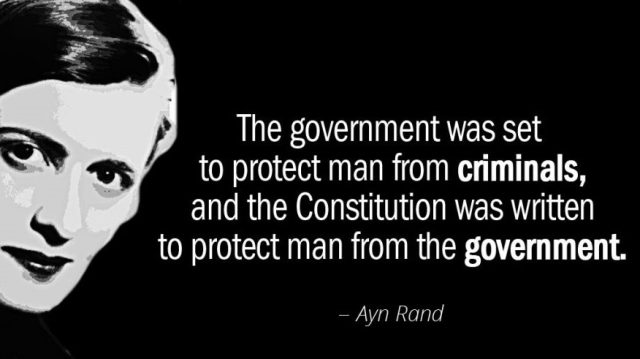 For the current and the coming generations, the objectivist philosopher Ayn Rand might surely have something very essential to offer. Although, like all others, of course, her ideas are not perfect. One of these is her clear conviction on the importance of having definite and concrete rationality upon things and actions. It is a very important tool for grasping and defining humanity’s proper role on this earth as a rational being. This is very clear on one of her statements during her early days. She once said: “Ask yourself whether the dream of heaven and greatness should be waiting for us in our graves – or whether it should be ours here and now and on this earth.”

This statement provokes a feeling of discontent and opposition to the idea that men are here to suffer for the purpose of getting the reward in afterlife; that only if we follow the commandments of religion, we will be granted a meaningful and colorful life after our death. It parallels to the Hindu idea of living in the now, while doing your best in your most humane behavior in oppose to living helplessly under one’s will. As Rand also stood against the idea of enslaving your fellow men: “I swear, by my life and my love of it, that I will never live for the sake of another man, nor ask another man to live for mine. To serve others or to rule them belongs on the same category because in both cases, the man who seeks this kind of service or power is making other men the primary concern of his life”. She then added that: “The purpose of morality is to teach you, not to suffer and die, but to enjoy yourself and live.”

During her time, she already warned humanity that: “We are fast approaching the stage of the ultimate inversion: the stage where the government is free to do anything it pleases, while the citizens may act only by permission; which is the stage of the darkest periods of human history, the stage of rule by brute force.”

This is why Ayn Rand stood strongly against the violation of the rights of the individuals as opposed to the rights of the collective. She consistently emphasized the necessity of individuation and the pursuit of one’s greatest capabilities by using the power of philosophy through the channels of man’s reasoning. For her emphasis on individual autonomy and rights, she said: “The smallest minority on earth is the individual. Those who deny individual rights cannot claim to be defenders of minorities”.

On one of her interviews, Ayn Rand strongly differentiated the philosophy of objectivism and the Nietzschean philosophy. She claimed that Nietzsche is not an upholder of reason and that objectivist philosophy is not only different to Nietzsche’s view but also the opposite. On her introductions, she said: “The idea that reality mainly consists of a will contradicts everything about the objectivist epistemology and method. You do not start with wide undefined floating abstractions devoid of any rationally defensible or demonstrable meaning.”

Here, she clearly demonstrated her firm position against Nietzsche’s abstractions, seeing them as weak and insignificant in determining our purpose on this life. Philosophically, Rand regarded Nietzsche as a mystique because, according to her words, he does not recognize the objectivity of reality, and this made him a subjectivist. She attributed the man’s contribution to the existentialist movement, regarded him as the precursor and a main influence of its time under the German romantic tradition.

For the current time, only the young can really tell the answer and can show the results. If there are things they should learn from Ayn Rand (which of course, there are many!), is the fact that she really contemplated for the advancement of humanity with honest and earnest regard to the early ideas and thinkers. Through her writings, Rand delivered the message clearly, that there is and has always been a necessity for philosophy and this can be fulfilled, of course, through the power of our rational brain. She clearly stated how important to always remember this: “From the smallest necessity to the highest religious abstraction, from the wheel to the skyscraper, everything we are and everything we have comes from one attribute of man – the function of his reasoning mind”.