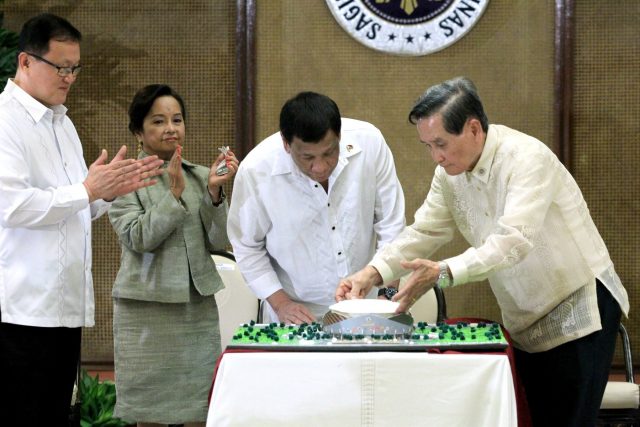 The Filipino-Chinese community is donating a P200-million multi-purpose center, seeking to help Maranaos recover from the five-month battle that devastated Marawi City last year. In a meeting with President Rodrigo Roa Duterte on Tuesday, August 14, at Malacañan Palace, the group presented the replica of the Marawi Filipino-Chinese Friendship Dome. The multi-purpose center, which is expected to be completed in 16 to 18 months from groundbreaking, will be constructed in a two-hectare area that will be identified by the Marawi local government. During the meeting, Domingo Yap, President of the Federation of Filipino-Chinese Chambers of Commerce and Industry Inc. (FFCCCII), said the dome can be used to showcase the city’s culture, facilitate commerce, promote athletics, and provide a home for other events and community needs. “It is the Filipino-Chinese community’s fervent wish that this donation will help in the healing of the people of Marawi from the scars of war and destruction,” he said. He further noted that the dome, designed for free by architect Jose Siao Ling who hails from Zamboanga City, can accommodate at least 4,000 people depending on the layout for the event. Yap said 11 Filipino-Chinese associations “came together as one, under the leadership of the Federation to seek the guidance of the government on the kind of contribution it can make.” Among the supporting organizations are FFCCCII Foundation, Inc.; Federation of Filipino-Chinese Associations of the Philippines; World News Daily; Filipino-Chinese Amity Club; Overseas Chinese Alumni Association of the Philippines; Filipino-Chinese Shin Lian Association, Inc.; Philippine Chinese Chamber of Commerce & Industry, Inc.; Overseas Chinese Chamber of Commerce & Industry of the Philippines, Inc.; Philippine Soong Ching Ling Foundation; Philippine Jin Jiang Shen Fu Zhen Association, Inc; and World Fujian Youth Association & Business Club, Inc. “Through the exemplary and open leadership of HUDCC and Bangon Marawi Task Force Chair Eduardo Del Rosario and the participation of Marawi Mayor Atty. Majul Gandamra, the donors were informed that an infrastructure donation that can help Marawi to return to normalcy as soon as possible will be most welcome,” he said. Yap said FFCCCII in July last year turned over to President Duterte P10.1 million as assistance to the families of the soldiers and policemen who lost their lives in liberating the city.