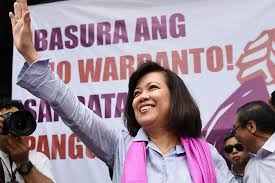 MANILA — The Judicial and Bar Council (JBC) has not yet opened the position of Chief Justice as it still waits for the final ruling of the Supreme Court (SC) on the quo warranto case against ousted chief magistrate Maria Lourdes Sereno,

“The JBC will open nominations/applications once the vacancy becomes permanent… To speak of till the QW (quo warranto) decision attains finality,” Justice Secretary Menardo Guevarra, a regular member of the JBC, said a text message sent to Philippine News Agency (PNA) Friday.

The JBC is constitutionally mandated to screen applicants to the Judiciary and top Ombudsman positions.

Last May 11, the high court, voting 8-6, granted the Office of the Solicitor General’s quo warranto petition and ousted Sereno for “unlawfully” holding the chief justice post for her failure to file and submit Statements of Assets, Liabilities and Net Worth (SALNs).

The SC declared the position of Chief Justice “vacant” and directed the JBC “to commence the application and nomination process.”

Sereno has 15 days to file a motion for reconsideration. Should she fail to do so, the decision becomes final and the JBC can then open the period of applications and nominations.

If she files the pleading, the high court will again deliberate on the case and put it to a vote. Once a vote on the motion for reconsideration is done, the decision becomes final.

Should Sereno lose on her motion for reconsideration, the period of applications and nominations for the next chief magistrate will commence.

From the time of vacancy, the President has 90 days to appoint the next Chief Justice. (PNA)