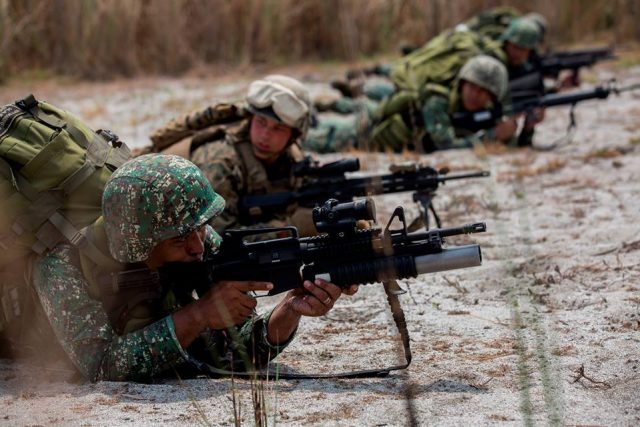 MANILA — The Armed Forces of the Philippines (AFP) is determined to frustrate and defeat efforts of all terror groups planning to launch attacks that can disrupt the peace and stability of the country.

This was disclosed Saturday by AFP spokesperson Edgard Arevalo after Prof. Rommel Banlaoi, of the Philippine Institute for Peace, Violence and Terrorism Research, claimed that extremist groups in Central Mindanao are conducting recruitment activities that are “massive, discreet, and decisive” among displaced Marawi City residents.

“Prof. Banlaoi may have drawn his conclusions from his sources. But in so far as the AFP is concerned there may be discreet and serious efforts to recruit but not ‘massive’ that it cannot be monitored by the AFP,” he added.

Arevalo also noted that the above-mentioned recruitment is also an indication of the severe defeat suffered by the Maute-ISIS Group in Marawi City during last year’s bloody fighting which started May 23, 2017 and ended on Oct. 23, of the same year.

“As we have said in the past, we were not surprised to hear reports of recruitment. The Maute-ISIS Group has suffered a serious defeat in Marawi. And certainly, they will recruit, re-organize and regroup to stage a comeback,” he added.

Over 1,000 Maute-ISIS terrorists were killed in the fighting including ISIS emir in Southeast Asia, Isnilon Hapilon, and Omar Maute, one of the founders of the terror organization, while around 200 soldiers and civilians died in the fighting.

“But the AFP under the leadership of Gen. Carlito Galvez, Jr., is determined to frustrate and defeat the terrorist group and that is the assurance we give our people as we work closely with other relevant agencies of the government,” Arevalo added.

“We do not have any disagreement to the recommendation of Prof. Banlaoi that ‘the government must not only focus on restoring Marawi City folks’ devastated homes but also rebuild their spirit and sense of hope,” he stressed.

The AFP spokesperson emphasized that the military is doing everything it can through programs that are designed to prevent and counter-radicalism and extremism.

“We are aware that the issues raised by our brothers and sisters at the relocation/evacuation sites cannot be addressed by military solution alone. That is why the AFP is working in close coordination with other agencies of the government like Department of Social Welfare and Development, Department of Health, Department of Interior and Local Government , National Economic Development Authority , among others to address the issues of IDPs (internally displaced persons) and terrorism,” Arevalo stressed. (PNA)