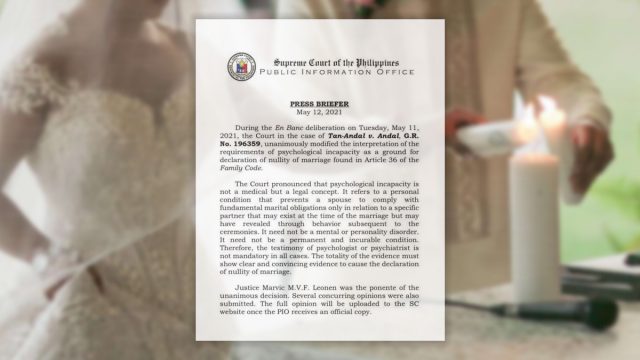 The Philippines’ Supreme Court states a distinct interpretation of the current law about the declaration of nullity of marriage.

An annulment case has recently gone through deliberations, the Tan-Andal v. Andal case and SC en banc voting collectively that the “psychological or mental incapacity” is a legal concept than a medical totality.

Article 36 of the Family Code presents a marriage contract by any party who was mentally incapacitated to comply further and commit with the fundamental marital obligations shall be invalid. And even if such incapacity becomes evident only after the marriage has been consecrated.

“It refers to a personal condition that prevents a spouse from complying with fundamental marital obligations only in relation to a specific partner that may exist at the time of the marriage [or] may have revealed through behavior subsequent to the ceremonies. It need not be a mental or personality disorder.”

The court further added that;

“The condition does not need be incurable or permanent” “the testimony of psychiatrists or psychologists is not mandatory in every case. The totality of the evidence must show clear and convincing evidence to cause the declaration of nullity of marriage.”

Women’s rights advocates welcome the Supreme Court’s decision as it’s developmental evidence for litigants of annulment cases. Cases that do involve “mental or psychological incapacity” are costly and lengthy Court procedures, and these are among the public and significant grievances parties admit going through annulment.

Elizabeth Angsioco, women’s reproductive health rights and legalized divorce advocate, shares that removing psychologists’ and psychiatrists’ requirements may shorten the process and possibly minimize the costs of court proceedings in these cases.

Nonetheless, Angsioco emphasized that the divorce law is still relevant in the Philippines.