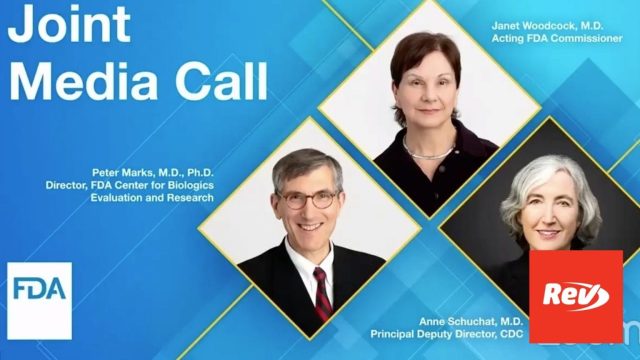 The Food and Drug Administration (FDA) and the Centers for Disease Control and Prevention (CDC) held a press briefing yesterday to order a pause for Johnson & Johnson vaccine administration due to reports of side effect described as “severe stroke like illness linked to low platelet counts”. According to their report, “six women between the ages of 18 and 48 developed blood clots after receiving the Johnson & Johnson vaccine” and one of these women died while others are in critical condition.

As always, these agencies and the mainstream media downplay the incidence in which many medical experts and scientists from Europe and the US have already warned about months ago. While pretending that “vaccine safety is a top priority for the federal government”, Dr. Janet Woodcock, the acting commissioner of the FDA, said:

“This morning, the FDA and CDC announced that out of an abundance of caution, we’re recommending a pause in the use of the Johnson and Johnson COVID-19 vaccine due to reports of six cases of a rare and severe type of blood clot following vaccine administration. We’re recommending this pause while we work together to fully understand these events and also, so we can get information out to healthcare providers and vaccine recipients. Right now, I’d like to stress these events appear to be extremely rare….”

Dr. Peter Marks, director of the FDA Center for Biologics Evaluation and Research, identified the side effect as “cerebral venous sinus thrombosis or CBST in combination with low levels of platelets in the blood called thrombocytopenia in women ages 18 to 48”. He then added:

In reality, this so-called “benefit-risk assessment” or “informed consent” rarely happens because when they do that, honestly and properly, there would be no doubt that people will not take the vaccines. In fact, in Europe alone the number of people who died from these vaccines already reached thousands and there are now hundreds of thousands of injuries reported. These reports are funded for public by the European Medicines Agency (EMA) themselves, an “agency of the European Union in charge of the evaluation and supervision of medicinal products”. This data is being published by EudraVigilance, a “European database of suspected drug reaction reports that also tracks reports of injuries and deaths following the experimental COVID-19 vaccines”. According to their latest report, through March 27, 2021, there are already 5,365 deaths and 238,949 injuries following COVID-19 vaccination. These vaccines are from Moderna, Pfizer-BioNTech, AstraZeneca, and of course, Johnson & Johnson.

“A system designed for collecting reports of suspected side effects. These reports are used for evaluating the benefits and risks of medicines during their development and monitoring their safety following their authorisation in the European Economic Area (EEA). EudraVigilance has been in use since December 2001.”

Just a month ago, several European countries also “temporarily stopped” the rollout of the AstraZeneca-Oxford University vaccine after the same cases of blood clots (CBST) have been reported. Both AstraZeneca and Johnson & Johnson use the same mRNA technology vaccines. In addition, Health Impact News, one of the very few press reporting these vaccine adverse reactions, has been reporting thousands of these cases since the beginning of the rollout which includes reports from CDC’s VAERS (vaccine adverse events reporting system) itself. But as always, events related to vaccine deaths and injuries rarely given serious reporting by the mainstream media. Even if they report it, they don’t really show the whole picture and they always downplay these events; providing only what the CDC, the FDA, and the vaccine companies are saying in the public which is: “it needs further investigation” or even outright denial that “there is no connection”. So imagine out of 6.8 million people who received the Johnson & Johnson shot, how many of these cases are not reported?

“For people who recently got the vaccine within the last couple of weeks, they should be aware to look for any symptoms. If you’ve received the vaccine and develop severe headache, abdominal pain, leg pain, or shortness of breath, you should contact your healthcare provider and seek medical treatment. Now, these symptoms are different from mild flu like symptoms, fever and so forth that many people experience in the couple of days after receipt of the vaccine.”

But as what was mentioned above regarding the outright lies and downplaying of these agencies, and contrary to many reports of deaths and injuries by EudraVigilance, including from the CDC’s own reporting system (VAERS), CDC’s Dr. Schuchat still suggests that people should continue taking these very dangerous and toxic vaccines: