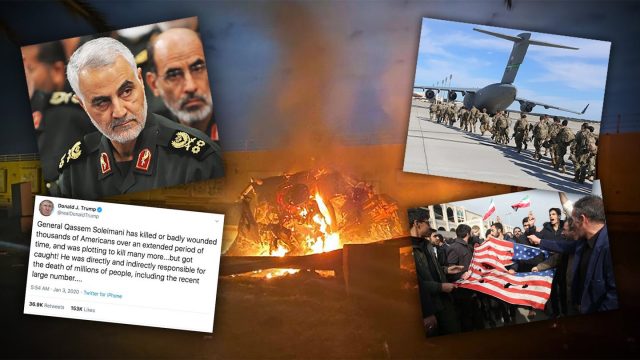 The US military launched an attack yesterday morning, Friday, hitting Baghdad International Airport and killing several people including five members of Iraqi paramilitary groups and Iran’s popular commander of the Quds force of the Islamic Revolutionary Guards Corps, an armed force distinct from the regular Iranian army, named Qasem Soleimani. Known as the “single most powerful player in Syrian wars” and a very important instrument for Iranian influence in the Middle East, Qasem Soleimani is seen by many as potential leader of Iran and supported by many different sectors of Iranian society.

According to the US Department of Defense (DoD), the said assassination was a retaliation for the recent attack by Iran that killed an American contractor in a Iraqi military base. The said yesterday attack happened as a response to the tensions in the US Embassy in Baghdad on the new year’s eve caused by so-called “Iran-backed militias planning to kill American diplomats”. As a result, President Donald Trump deployed 750 US soldiers to the Middle East, seeking for retaliation against the embassy riot in Baghdad and then later ordered a missile strike on Baghdad International Airport which also killed Abu Mahdi al-Muhandis, the deputy commander of PMF or Popular Mobilization Forces, an Iran-backed militias. However, on his tweets Trump also stated other reasons for assassinating Qasem Soleimani, claiming that:

“General Qassem Soleimani has killed or badly wounded thousands of Americans over an extended period of time, and was plotting to kill many more…but got caught! He was directly and indirectly responsible for the death of millions of people, including the recent large number protesters killed in Iran itself.”

In addition, according to the Department of Defense:

In connection to his Twitter statement, Trump also said that not all Iranians support Soleimani.

“While Iran will never be able to properly admit it, Soleimani was both hated and feared within the country. They are not nearly as saddened as the leaders will let the outside world believe. He should have been taken out many years ago! We took action last night to stop a war; we did not take action to start a war.”

Despite of this, many people still believe that the incident yesterday could cause conflict to escalate more. The death of Soleimani and Muhandis could result to “severe retaliations” from Iran and other forces in the Middle East that are against American and also Israel’s interests. Worried about this possibility, the US Embassy in Baghdad advised all American citizens to immediately leave Iraq. Adhering to this, American oil workers are now starting to evacuate Iraq.

Because of the incident, Iran’s Supreme Leader Ayatollah Ali Khamenei declared three days of public mourning for the dead officials and left a warning that a “harsh retaliation is waiting for the US”. Meanwhile, President Hassan Rouhani said Iran and the “free nations of the region” will seek vengeance against the US in the right time. On a government website, President Rouhani said:

“There is no doubt that the great nation of Iran and the other free nations of the region will take revenge for this gruesome crime from criminal America.”

Meanwhile, tens of thousands of Iranians supporting Soleimani took to the streets of Tehran chanting “Death to America”. However, the US Secretary of State Mike Pompeo also posted a video on Twitter showing Iraqi people dancing in the streets in celebration of Soleimani’s death. On the other hand, Iran’s Supreme National Security Council has also stated that retaliation would happen “in the right place and time”.

“America should know that its criminal attack on General Soleimani has been the country’s biggest mistake in west Asia, and America will not avoid the consequences of this wrong calculation easily. These criminals will face severe vengeance… in the right place and time.”