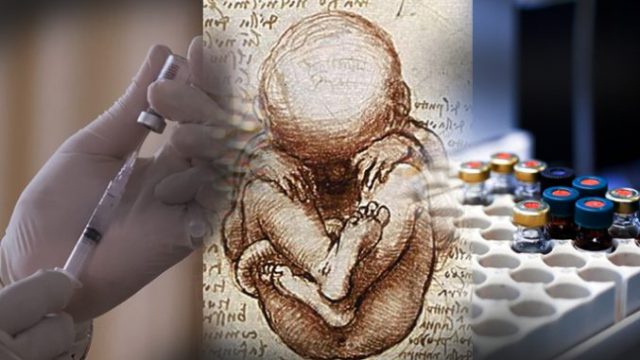 In leaked internal emails, Pfizer was exposed secretly using human fetal tissue in laboratory testing for its COVID vaccine. This was reported by Project Veritas for its fifth video investigation series, featuring Pfizer whistle-blower Melissa Strickler. In that video interview, Strickler exposed the email of two high-level executives of Pfizer, Vanessa Gelman, Senior Director of Worldwide Research, Development, and Medical Communication and Philip Dormitzer, Vice President and Chief Scientific Officer of Viral Vaccines, stating how the two try to convince the staff to just be silent about this, that human embryonic kidney cells are used in Pfizer vaccines and keep it unknown to the public as much as possible.

According to their own admission, fetal cells were used for “proof of concept”, meaning to demonstrate “how a cell could take up mRNA and produce the SARS-CoV-2 spike protein or to characterize the SARS-CoV-2 spike protein” in the early development of mRNA vaccine technology. However, due to decades of controversies and public outrage about the use of this method, and most especially due to the reason that people can use this for religious exemption to vaccination, it is now being denied by the companies themselves. In one government paper for example, particularly from Dakota health agency, they stated:

“The mRNA COVID-19 vaccines produced by Pfizer and Moderna do not require the use of any fetal cell cultures in order to manufacture (produce) the vaccine.”

While on the same document, they also stated:

“In various stages of vaccine development and manufacturing, some of the COVID-19 vaccines used cells originally isolated from fetal tissue (often referred to as fetal cells), some of which were originally derived from an aborted fetus.”

This is definitely true not only for COVID vaccines but also for other kinds as well. In fact, HEK293 human cell lineage is widely used in cell biology and biotechnology. Fetal cell lines were derived in the ’60s and ’70s from two elective abortions, according to their narrative, for the purpose of creating vaccines for hepatitis A, rubella, and rabies. Today, the fetal cell lines being used for COVID vaccines are from two sources; these are the HEK-293 (kidney cell line that was isolated from a fetus in 1973) and PER.C6, a retinal cell line that was isolated from an aborted fetus in 1985. Therefore, it is an outright lie when someone denies the use of fetal cell tissue on vaccines currently being rolled out. In fact, in the said email, Vanessa Gelman even stated:

“From the perspective of corporate affairs, we want to avoid having the information on fetal cells floating out there…

We have tried really hard not to share unless it’s strictly necessary and mission critical.

The risk of communicating this right now outweighs any potential benefit we could see, particularly with general members of the public who may take this information and use it in ways we may not want out there. We have not received any questions from policymakers or media on this issue in the last few weeks, so we want to avoid raising this if possible…”

According to the Dakota health agency itself, “to develop and manufacture some vaccines, pharmaceutical companies prefer human cell lines over other cells”. Even the other Pfizer executive, Philip Dormitzer himself wrote on that confidential email exposed by Strickler:

Despite this, Dormitzer still just wants the company employees to “stick with Pfizer’s polished narrative omitting any mention of aborted fetal tissue (HEK) to avoid any issues with the public”. Meanwhile, consistent with this culture of secrecy, Gelman also said about the information:

When Project Veritas asked Melissa Strickler what could be the reason why Pfizer is denying or suppressing this information, she said:

I think they want nobody to have an excuse to not get it… And they’re denying our religious exemptions at Pfizer.”

To see the full interview, go to this link: